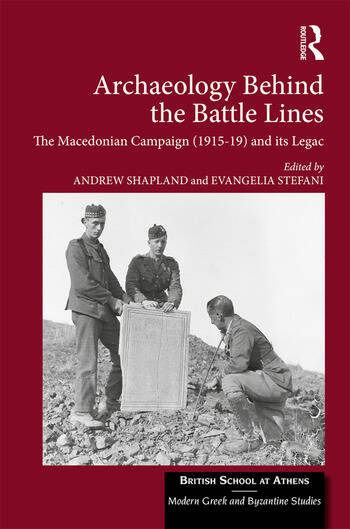 Archaeology Behind the Battle Lines: The Macedonian Campaign (1915-19) and its Legacy

This volume focuses on a formative period in the history and archaeology of northern Greece. The decade following 1912, when Thessaloniki became part of Greece, was a period marked by an extraordinary internationalism as a result of the population movements caused by the shifting of national borders and the troop movements which accompanied the First World War.

The papers collected here look primarily at the impact of the discoveries of the Army of the Orient on the archaeological study of the region of Macedonia. Resulting collections of antiquities are now held in Thessaloniki, London, Paris, Edinburgh and Oxford. Various specialists examine each of these collections, bringing the archaeological legacy of the Macedonian Campaign together in one volume for the first time.

A key theme of the volume is the emerging dialogue between the archaeological remains of Macedonia and the politics of Hellenism. A number of authors consider how archaeological interpretation was shaped by the incorporation of Macedonia into Greece. Other authors describe how the politics of the Campaign, in which Greece was initially a neutral partner, had implications both for the administration of archaeological finds and their subsequent dispersal. A particular focus is the historical personalities who were involved and the sites they discovered. The role of the Greek Archaeological Service, particularly in the protection of antiquities, as well as promoting excavation in the aftermath of the 1917 Great Fire of Thessaloniki, is also considered.

Foreword: Archaeology Behind the Battle Lines

Andrew Shapland, with an Appendix by Amelia Dowler

Andrew Shapland is the Greek Bronze Age Curator in the Department of Greece and Rome at the British Museum, UK.

Evangelia Stefani is Head of the Department of Ceramics, Frescoes and Mosaics at the Archaeological Museum of Thessaloniki, Greece.

Archaeology Behind the Battle Lines: The Macedonian Campaign (1915-19) and its Legacy