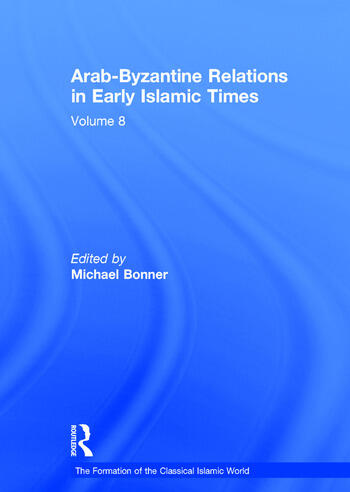 The Byzantine Empire was the Islamic commonwealth’s first and most stubborn adversary. For many centuries it loomed large in Islamic diplomacy, military operations and commerce, as well as in Islamic representations of the world in general. Moreover, the ways in which early Muslims and Byzantines perceived one another ” both polemically and otherwise ” afterwards proved decisive for the mutual perceptions between the Islamic world and Christian Western Europe. For these and other reasons, Arab-Byzantine relations have been a major concern of modern scholarship on early Islam for well over a century. Arab-Byzantine Relations in Early Islamic Times presents some of the most important of these contributions, organized according to the following themes: war and diplomacy; frontiers and military organization; polemics and images of the 'other'; exchange, influence and convergence; and martyrdom, jihad and holy war. An introductory essay discusses these themes within the contexts of early Islamic society, politics and economy.

Contents: Introduction. War and Diplomacy: The Persians in Asia Minor and the end of antiquity, Clive Foss; Arab wars with the Byzantines in the Umayyad period, Julius Wellhausen; Arab-Byzantine relations under the Umayyad Caliphate, H.A.R.Gibb; Byzantine-Arab diplomacy in the Near East from the Islamic conquests to the mid-11th century, Hugh Kennedy. Frontiers and Military Organization: 7th-century continuities: the AjnÃ¢d and the 'Thematic Myth', John Haldon; The Arab-Byzantine frontier in the 8th and 9th centuries: military organisation and society in the borderlands, J.F. Haldon and H. Kennedy. Polemics and Images of the 'Other': Apocalyptic and other materials on Early Muslim-Byzantine wars: a review of Arabic sources, Suliman Bashear; Byzantine views of Islam, John Meyendorff; Byzantium and the Arabs: the image of the Byzantines as mirrored in Arabic literature, Ahmad M.H. Shboul. Exchange, Influence and Confluence: Islamic art and Byzantium, Oleg Grabar; Parallelism, convergence and influence in the relations of Arab and Byzantine philosophy, literature and piety, Gustav E. von Grunebaum; Theophanes and the Arabic historical tradition: some indications of intercultural transmission, Lawrence I. Conrad; Islam, Judaeo-Christianity and Byzantine iconoclasm, Patricia Crone. Martyrdom, Jihad, Holy War: Some observations concerning the early development of Jihad on the Arab-Byzantine frontier, Michael Bonner; The 60 Martyrs of Gaza and the martyrdom of Bishop Sophronius of Jerusalem, David Woods. General index.