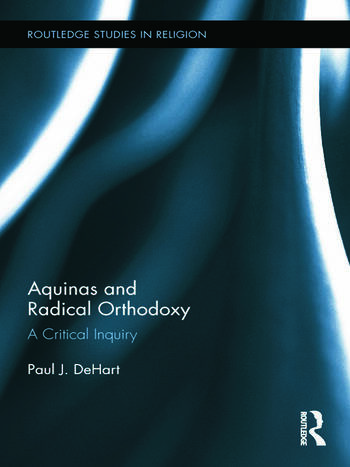 Aquinas and Radical Orthodoxy investigates the encounter of the most vibrant and controversial trend in recent theology with the greatest Christian thinker of the Middle Ages. The book describes Radical Orthodoxy’s orientation and highlights those anti-secular strategies and intellectual influences that have shaped its appeal to Aquinas. It surveys the emergence of the particular picture of Aquinas especially associated with the leaders of Radical Orthodoxy, John Milbank and his student Catherine Pickstock, along with the scholarly disputes which prompted and followed that development. The book then undertakes a detailed investigation of the pivotal publications on Aquinas of those two authors, laying out their difficult theories in clear language, carefully examining the texts of Aquinas to which they appeal, and challenging their interpretations on a number of fundamental points. Topics covered include: analogical language and knowledge of God, the role of metaphysics within theology, the relation of cognition to the divine archetypes of things, the possibility of human apprehension of God’s essence, the nature of substance, and speculation on the Trinity. The conclusion reflects on those elements suppressed by the Radical Orthodox reading of Aquinas, their constructive philosophical and theological possibilities, and the challenges they present to the Radical Orthodox project.

Preface  1. Radical Orthodoxy: A Genealogy of a Genealogy  2. Aquinas among the Radically Orthodox: Investigations, Invocations, Altercations  Part I. On Being Heard But Not Seen  3. Clashes at Cambridge: The Dispute with Nicholas Lash and the Emergence of Milbank’s Aquinas  4. Language or Ontology? Milbank’s Aquinas and the Nature of Analogy  5. Revelation’s ‘Evacuation’ of Metaphysics (I): First Philosophy as Ersatz Theology  6. Revelation’s ‘Evacuation’ of Metaphysics (II): The Truncated Object of First Philosophy  Part II. On Seeing Only What One Wants to See  7. "Token Bumpkinhood" (I): Pickstock, Aquinas, and the Creative Dimension of Knowledge  8. "Token Bumpkinhood" (II): Pickstock, Aquinas, and the Truth in the Divine Ideas  9. The Creature as the Creator’s Unveiling: Aquinas as Phenomenologist According To Milbank  10. Knowing God’s Essence: Does ‘No’ Mean ‘No’?  11. Why all Knowledge is Supernatural: Milbank’s Aquinas, Aristotle, and the Demotion of Substance  12. Divine Revelation and Human Performance: Milbank’s Aquinas on the Trinity  13. Conclusion.  Notes.  Index

Paul J. DeHart is Associate Professor of Theology at Vanderbilt University. Born in Memphis, Tennessee, he studied theology at Yale University and the University of Chicago, where he obtained his Ph.D. in 1997. His previous books are Beyond the Necessary God (1999) and The Trial of the Witnesses (2006).