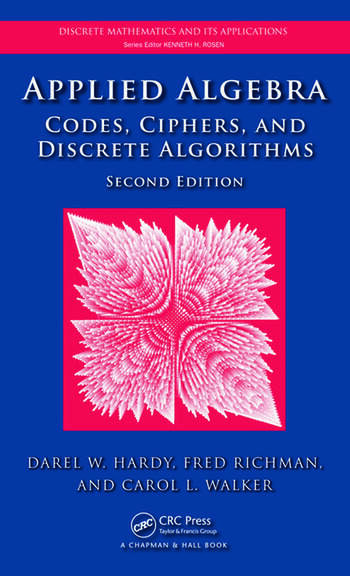 Using mathematical tools from number theory and finite fields, Applied Algebra: Codes, Ciphers, and Discrete Algorithms, Second Edition presents practical methods for solving problems in data security and data integrity. It is designed for an applied algebra course for students who have had prior classes in abstract or linear algebra. While the content has been reworked and improved, this edition continues to cover many algorithms that arise in cryptography and error-control codes.

Instead of a general study on finite groups, the book considers finite groups of permutations and develops just enough of the theory of finite fields to facilitate construction of the fields used for error-control codes and the Advanced Encryption Standard. It also deals with integers and polynomials. Explaining the mathematics as needed, this text thoroughly explores how mathematical techniques can be used to solve practical problems.

About the Authors
Darel W. Hardy is Professor Emeritus in the Department of Mathematics at Colorado State University. His research interests include applied algebra and semigroups.

Fred Richman is a professor in the Department of Mathematical Sciences at Florida Atlantic University. His research interests include Abelian group theory and constructive mathematics.

Carol L. Walker is Associate Dean Emeritus in the Department of Mathematical Sciences at New Mexico State University. Her research interests include Abelian group theory, applications of homological algebra and category theory, and the mathematics of fuzzy sets and fuzzy logic.

The Fundamental Theorem of Arithmetic

Bar Codes Based on Two-out-of-Five Code

Theorems of Fermat and Euler

A System for Exchanging Messages

The Ring GFp[x] of Polynomials

The Galois Fields GF8 and GF16

The Multiplicative Group of GFpn

Appendix A: Topics in Algebra and Number Theory

This book attempts to show the power of algebra in a relatively simple setting.
—Mathematical Reviews, 2010

… The book supports learning by doing. In each section we can find many examples which clarify the mathematics introduced in the section and each section is followed by a series of exercises of which approximately half are solved in the end of the book. Additional the book comes with a CD-ROM containing an interactive version of the book powered by the computer algebra system Scientific Notebook. … the mathematics in the book are developed as needed and the focus of the book lies clearly on learning by examples and exercises. … the book gives good insight on how algebra can be used in coding and cryptography … The strength of the book is clearly the number of examples …
—IACR book reviews, January 2010 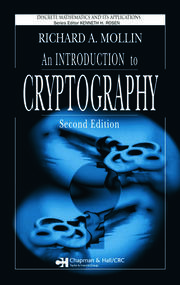 An Introduction to Cryptography