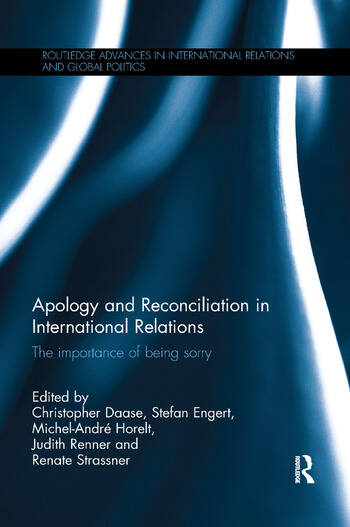 Apology and Reconciliation in International Relations: The Importance of Being Sorry

This book looks into the role and effects of public apologies in international relations. It focuses on two major questions - why and when do states issue apologies for historic crimes and how and under what conditions are these apologies successful in remedying conflictive relationships?

In recent years, we have witnessed an unseen popularity of apologies, with numerous politicians, managers and clergymen being eager to apologise and atone for the wrong-doings of their countries or institutions. Public apologies, thus, are a new and highly interesting, while nevertheless still puzzling phenomenon, the precise role and meaning of which in international politics remains to be explored. This book sets out to do exactly this. Focusing in particular on state apologies, it assembles twelve detailed empirical case studies which deal with the two questions raised above. In the first part, the case studies reconstruct the processes in which state representatives react to calls for public atonement, and in the second part the case studies explore the reactions to the apology and evaluate signs for its success or failure.

All case studies are based on a theoretical framework which is outlined in the introduction to the book and helps develop tentative assumptions about the emergence and the effects of state apologies, drawing on different strands of literature, such as political science, philosophy, sociology or psychology. This work will be of great interest to students and scholars of conflict reconciliation, international relations and transitional justice.

Stefan Engert is Senior Research Felllow at the Department of International Organization at the Goethe-University Frankfurt. He specializes in theories of International Relations, international security as well as peace- and conflict studies. He has published a number of books with Palgrave MacMillan, Routledge and Campus publishers (Frankfurt/New York).

Michel-André Horelt is Assistant Professor at the Ludwig-Maximilians-University Munich. His research focuses on ritualized reconciliation practices in post-conflict situations. His field of interests covers the analysis of different modes and effects of transitional justice instruments such as apologies and war crime trials. Michel-André Horelt has recently published on these topics in Die Friedens-Warte and some book contributions.

Judith Renner is Assistant Professor at the Department for Political Science of the Technical University Munich. Her research focuses on apologies, truth commissions, reconciliation and human rights. She has published in journals such as the Review of International Studies, and is one of the editors of the book Reconciliation after Terrorism that has been published with Routledge in 2012. Her monograph Discourse, Normative Change and the Quest for Reconciliation in Global Politics appeared with Manchester University Press in 2013.

Renate Strassner is Teaching Fellow at the Ludwig-Maximilians-University Munich. She has conducted extensive research on the region of South East Asia with a particular focus on Cambodia and Indonesia. Dr. Strassner has published several articles and chapters about questions on democracy, political Islam and cultural identity in these countries in journal such as Blätter für deutsche und internationale Politik and Außenpolitik.

`Until now, the literature on the political apology has lacked both a serious consideration of the international relations perspective and detailed case studies of inter-state apologies. This excellent collection goes a long way to rectifying these omissions.’ Michael Cunningham, Senior Lecturer in Politics, University of Wolverhampton, UK

Apology and Reconciliation in International Relations: The Importance of Being Sorry