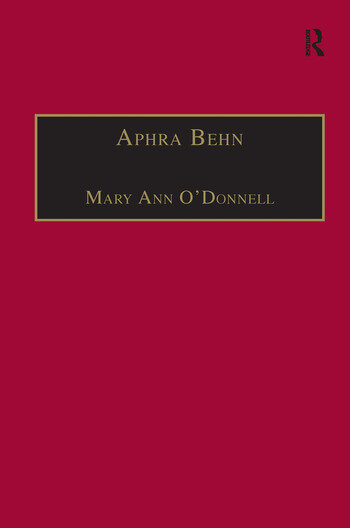 Aphra Behn: An Annotated Bibliography of Primary and Secondary Sources

This annotated bibliography constitutes a thoroughly revised and more easily readable study of Behn's publications, of those edited or translated by her, of publications that included her works, and of writings ascribed to her, along with an annotated bibliography of over 1600 works about her from 1671 to 2001, with an unannotated update covering 2002. The augmented primary bibliography describes all known editions and issues of her works to 1702, and adds a catalogue of editions to 2002, including on-line sources. The secondary bibliography adds close to 1000 items published since 1984 to the original 600 of the first edition along with about 175 more from 1671 to 1984, with attention to materials not in English. New appendices include a list of dedicatees, actors, recent productions (with reviews), and provenances. This volume will be invaluable for book dealers, collectors and librarians, as well as students and scholars of Aphra Behn and of Restoration literature.

Contents: Preface; Introduction; The Primary Bibliography: Section A: complete works by Aphra Behn: The Forc'd Marriage; The Amorous Prince; The Dutch Lover; Abdelazer; The Town-Fopp; The Rover; Sir Patient Fancy; The Feign'd Curtizans; The Second Part of The Rover; The False Count; The Roundheads; A Prologue by Mrs Behn to Her New Play Called to Like Father, Like Son; The City-Heiress; Prologue to Romulus; The Young King; Prologue [to Valentinian]; Love-Letters Between a Noble-Man and His Sister [Part I]; Poems upon Several Occasions With a Voyage to the Island of Love; A Pindarick on the Death of Our Late Sovereign; A Poem Humbly Dedicated to the Great Patern of Piety and Virtue Catherine Queen Dowager; A Pindarick Poem on the Happy Coronation of His Most Sacred Majesty James II; Love Letters from a Noble Man to His Sister [Part II]; The Emperor of the Moon; The Luckey Chance; To the Most Illustrious Prince Christopher Duke of Albemarle; The Amours of Philander and Silvia [Love-Letters (part III)]; A Congratulatory Poem to Her Most Sacred Majesty on the Universal Hopes for a Prince of Wales; The Fair Jilt; A Poem to Sir Roger L'Estrange on His Third Part of the History of the Times; A Congratulatory Poem to the King's Most Sacred Majesty on the Happy Birth of the Prince of Wales; Oroonoko; Three Histories; To Poet Bavius; A Congratulatory Poem to Her Sacred Majesty Queen Mary upon Her Arrival in England; A Pindaric Poem to the Reverend Doctor Burnet; The Lucky Mistake; The History of the Nun; The Widdow Ranter; The Younger Brother; The Histories and Novels of the late Ingenious Mrs Behn; The Unfortunate Bride; The Wandring Beauty; Histories, Novels, and Translations Written by the Most Ingenious Mrs Behn; Plays Written by the Late Ingenious Mrs Behn; Section BA: Works edited or translated by Behn: Covent Garden Drolery; Miscellany; La Montre; Lycidus; Agnes de Castro; The History of Oracles and the Cheats of the Pagan Priests; A Discovery of New Worlds; The Land of Love; Section BB: works written or edited by others with works by Behn: The Six Days Adventure; Windsor Drollery; A Collection of Poems Written upon Several Occasions; London Drollery; Methinks the Poor Town Has Been Troubled Too Long; The Last and Best Edition of New Songs; Ovid's Epistles; Rochester's Poems upon Several Occasions; Young Jemmy; Beauties Triumph; The Loves of Jockey and Jenny; Ephelia's Female Poems on Several Occasions; Wit and Drollery; The Compleat Courtier; Romulus and Hersilia; De Natura Rerum; Valentinian; The Way to Make All People Rich; The Loyal Garland; The Sacrifice; A Modern Essay on the Tenth Satyr of Juvenal; Ã†sop's Fables; Poems to the Memory of Edmond Waller; Cowley's Six Books of Plants; The History of Adolphus; Miscellany Poems upon Several Occasions; Poems on Affairs of State; The Muses Mercury; Familiar Letters of Love, Gallantry, and Several Occasions; Section CA: attributions with some validity: The Debauchee; The Counterfeit Bridegroom; The Revenge; Section CB: other attributions or works containing attributions: The Westminster Drollery; The Woman Turn'd Bully; Parthenia's Complaint; The English Princess; The Lives of Sundry Notorious Villains; Hattigé; Floriana; The Perplex'd Prince; The Loves of Damon and Sappho; The Ten Pleasures of Marriage; On the Martyrdom of King Charles I; Shaftsbury's Farewel; Algernoon Sidneys Farewel; An Elegy on the Earl of Essex; Upon the Marriage of Prince George of Denmark; Five Love-letters Written by a Cavalier; The Confession of the New Married Couple; The Duke of Monmouth's Kind Answer; 'On Mr Dryden, Renegate'; Rebellions Antidote; To the Memory of the Illustrious Prince George Duke of Buckingham; Dialogue; Love Letters Between Polydorus and Messalina; The Vision; The Restor'd Maidenhead; A New Song Sung in Abdelazar; Chorus Poetarum; The Town Rakes; A Companion for the Ladies-Closets; The Dramatick Works of George Duke of Buckingham. The Secondary Bibliography; Appendices; Indexes.

Mary Ann O'Donnell is Professor of English and Dean of the School of Arts at Manhattan College. She has written extensively on Aphra Behn. The first edition of this work was published in 1986.

Reviews of first (Taylor & Francis) edition: 'Ms. O'Donnell's Bibliography should help support her theme that Behn "deserves" the "Fame she longed for"' The Scriblerian 'O'Donnell's bibliography is thorough, accurate, and useable, valuable to all students of Restoration literature' Tulsa Studies in Women's Literature "the most concrete and reliable information we now have on this author" Rocky Mountain Review, Vol. 43, No. 4 "This is a major contribution to the bibliography of an important Restoration author." Choice "an essential addition to library collections on Restoration literature and drama" American Reference Books Annual, Vol. 18 Reviews of Second Edition: 'A prodigious reference for graduate programs in English, women's studies and drama... Highly recommended.' Choice 'O'Donnell has produced a superbly useful and judicious revision, from the preface to the indices... a 730-page bibliography likely to be consulted weekly - especially one so well compiled and bound.' The East-Central Intelligencer

Aphra Behn: An Annotated Bibliography of Primary and Secondary Sources