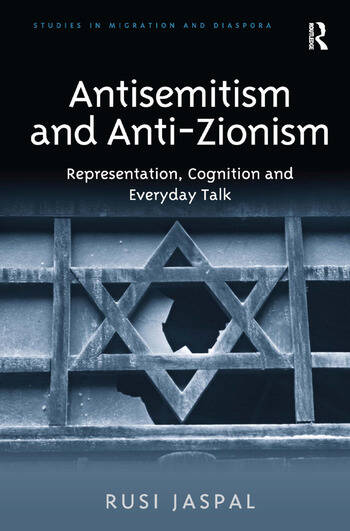 Antisemitism and anti-Zionism are complex, delineable, yet inter-related social-psychological phenomena. While antisemitism has been described as an irrational, age-old prejudice, anti-Zionism is often represented as a legitimate response to a ’rogue state’. Drawing upon media and visual sources and rich interview data from Iran, Britain and Israel, Antisemitism and Anti-Zionism: Representation, Cognition and Everyday Talk examines the concepts of antisemitism and anti-Zionism, tracing their evolution and inter-relations, and considering the distinct ways in which they are manifested, and responded to, by Muslim and Jewish communities in Iran, Britain and Israel. Providing insights from social psychology, sociology and history, this interdisciplinary analysis sheds light on the pivotal role of the media, social representations and identity processes in shaping antisemitism and anti-Zionism. As such, this provocative book will be of interest to social scientists working on antisemitism, race and ethnicity, political sociology and political science, media studies and Middle Eastern politics.

Rusi Jaspal is a Chartered Psychologist and Senior Lecturer in Psychology in the School of Applied Social Sciences at De Montfort University, Leicester, UK.

’A meticulously researched and brilliantly argued exposure of the inextricable link between antisemitism and anti-Zionism that goes a long way to explaining why, for all its extraordinary achievements, Israel is the only state in the world whose right to exist is constantly debated and challenged.’ Efraim Karsh, King’s College London, UK and Bar-Ilan University, Israel ’Antisemitism and Anti-Zionism is a multi-faceted book that skilfully blends together psychology, media studies, history and sociology. Its methodology includes empirical analysis of the Iranian press and interviews with different groups in Britain. The book does not attempt to provide an overarching explanation of anti-Semitism and anti-Zionism but through the Iranian and the British lenses we are able to learn about the biases and the prejudices that feed these negative phenomena, and the resilient methods that its target group develops to withstand the threat.’ Raphael Cohen-Almagor, University of Hull, UK ’Dr Jaspal has written a much-needed and tremendously important book. His eye-opening work is empirically-grounded, fair, carefully informed by social psychological theory and profoundly disturbing. It should be read by every social scientist and, indeed, every person who seeks to be seriously well-informed about how racism and bigotry operate in the 21st century.’ Neil J. Kressel, William Paterson University, USA and author of The Sons of Pigs and Apes: Muslim Antisemitism and the Conspiracy of Silence ’Rusi Jaspal has provided a guidepost as to where antisemitism research truly begins and where it should go. Tajfel and Moscovici laid the foundation and Jaspal rightfully built a solid house on it.’ Steven K. Baum, Editor, Journal for the Study of Antisemitism (JSA)