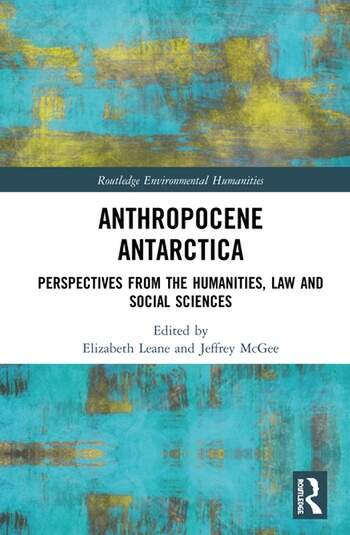 Anthropocene Antarctica: Perspectives from the Humanities, Law and Social Sciences

Anthropocene Antarctica offers new ways of thinking about the ‘Continent for Science and Peace’ in a time of planetary environmental change. In the Anthropocene, Antarctica has become central to the Earth’s future. Ice cores taken from its interior reveal the deep environmental history of the planet and warming ocean currents are ominously destabilising the glaciers around its edges, presaging sea-level rise in decades and centuries to come. At the same time, proliferating research stations and tourist numbers challenge stereotypes of the continent as the ‘last wilderness.’ The Anthropocene brings Antarctica nearer in thought, entangled with our everyday actions. If the Anthropocene signals the end of the idea of Nature as separate from humans, then the Antarctic, long considered the material embodiment of this idea, faces a radical reframing.

Understanding the southern polar region in the twenty-first century requires contributions across the disciplinary spectrum. This collection paves the way for researchers in the Environmental Humanities, Law and Social Sciences to engage critically with the Antarctic, fostering a community of scholars who can act with natural scientists to address the globally significant environmental issues that face this vitally important part of the planet.

2 Governing Antarctica in the Anthropocene

6 Ice and the ecothriller: Popular representations of Antarctica in the Anthropocene

7 Listening ‘at the sea ice edge’: Compositions based on soundscape recordings made in Antarctica

8 Save the penguins: Antarctic advertising and the PR of protection

11 Placing the past: The McMurdo Dry Valleys and the problem of geographical specificity in Antarctic history

Elizabeth Leane is Professor of English at the School of Humanities/Institute for Marine and Antarctic Studies, University of Tasmania.

Anthropocene Antarctica: Perspectives from the Humanities, Law and Social Sciences