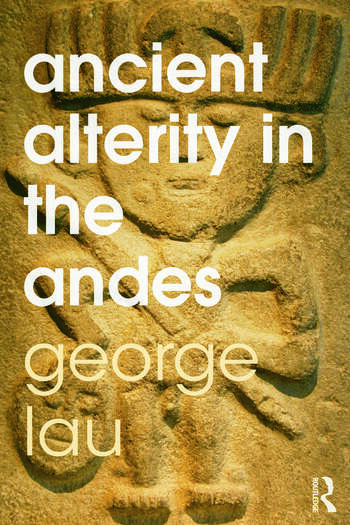 Ancient Alterity in the Andes: A Recognition of Others

Ancient Alterity in the Andes is the first major treatment on ancient alterity: how people in the past regarded others. At least since the 1970s, alterity has been an influential concept in different fields, from art history, psychology and philosophy, to linguistics and ethnography. Having gained steam in concert with postmodernism’s emphasis on self-reflection and discourse, it is especially significant now as a framework to understand the process of ‘writing’ and understanding the Other: groups, cultures and cosmologies. This book showcases this concept by illustrating how people visualised others in the past, and how it coloured their engagements with them, both physically and cognitively.

Alterity has yet to see sustained treatment in archaeology due in great part to the fact that the archaeological record is not always equipped to inform on the subject. Like its kindred concepts, such as identity and ethnicity, alterity is difficult to observe also because it can be expressed at different times and scales, from the individual, family and village settings, to contexts such as nations and empires. It can also be said to ‘reside’ just as well in objects and individuals, as it may in a technique, action or performance. One requires a relevant, holistic data set and multiple lines of evidence. Ancient Alterity in the Andes provides just that by focusing on the great achievements of the ancient Andes during the first millennium AD, centred on a Precolumbian culture, known as Recuay (AD 1-700).

Using a new framework of alterity, one based on social others (e.g., kinsfolk, animals, predators, enemies, ancestral dead), the book rethinks cultural relationships with other groups, including the Moche and Nasca civilisations of Peru’s coast, the Chavín cult, and the later Wari, the first Andean empire. In revealing little known patterns in Andean prehistory the book illuminates the ways that archaeologists, in general, can examine alterity through the existing record. Ancient Alterity in the Andes is a substantial boon to the analysis and writing of past cultures, social systems and cosmologies and an important book for those wishing to understand this developing concept in archaeological theory.

1. Recognising Others: an Introduction  2. Region, Art and Society and during the Early Intermediate Period  3. Familiar Others: Kin, Collectivity and Authority  4. Predatorial Relations 5. The Dead and the Living  6. Conclusions

Ancient Alterity in the Andes: A Recognition of Others