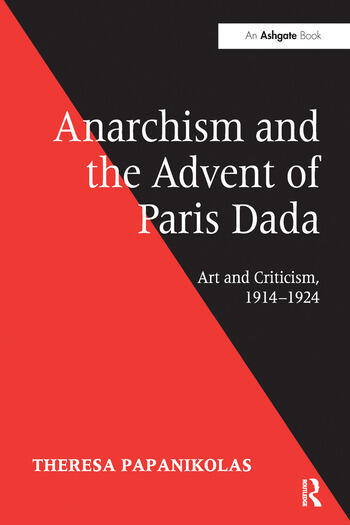 Anarchism and the Advent of Paris Dada sheds new light on Paris Dada's role in developing the anarchist and individualist philosophies that helped shape the cultural dialogue in France following the First World War. Drawing on such surviving documentation as correspondence, criticism, periodicals, pamphlets, and manifestoes, this book argues that, contrary to received wisdom, Dada was driven by a vision of social change through radical cultural upheaval. The first book-length study to interrogate the Paris Dadaists' complex and often contested position in the postwar groundswell of anarcho-individualism, Anarchism and the Advent of Paris Dada offers an unprecedented analysis of Paris Dada literature and art in relation to anarchism, and also revives a variety of little known anarcho-individualist texts and periodicals. In doing so, it reveals the general ideological diversity of the postwar French avant-garde and identifies its anarchist concerns; in addition, it challenges the accepted paradigm that postwar cultural politics were monolithically nationalist. By positioning Paris Dada in its anarchist context, this volume addresses a long-ignored lacuna in Dada scholarship and, more broadly, takes its place alongside the numerous studies that over the past two decades have problematized the politics of modern art, literature, and culture.

Theresa Papanikolas is Curator of European and American Art at the Honolulu Academy of Arts, USA.

'Theresa Papanikolas’s book on Paris Dada revises our understanding of this seminal movement which - in contrast to Berlin and Zurich Dada - has been too readily dismissed as lacking an ideological focus. The author's fresh perspective enables her to reconfigure the history of the movement in an exciting way that offers new insight on Paris Dadaist art and writing.' Mark Antliff, author of Avant-Garde Fascism: The Mobilization of Myth, Art and Culture in France, 1909-1939