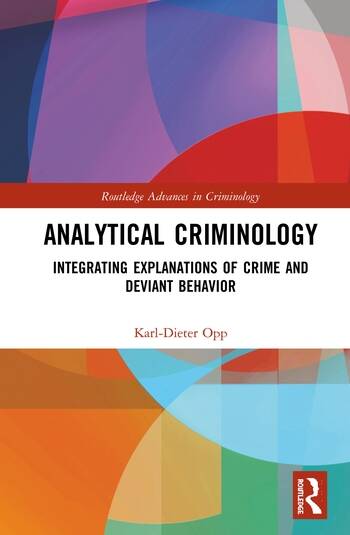 Available for pre-order. Item will ship after May 4, 2020
Add to Wish List
FREE Standard Shipping!

There are more than twenty theories that explain crime. Each theory has weaknesses, and no scholar knows which theory is best. To remedy this unsatisfactory situation a new research program of comparative theory testing is proposed. Comparing the theories with each other has not yet been successful. The alternative, suggested in this book, is to show how criminological theories must be modified if they are compared with a general behavioral theory. The book shows for the major criminological theories under which conditions they provide valid explanations of crime. The latter thus become integrated as parts of the general theory.

The general theory that is chosen is a version of the theory of rational action. This is not the problematic version discussed in the literature, but states the real conditions of decision making and, thus, explains when people actually violate the law or remain law-abiding.

The general theory is a component of a theoretical approach that explains individual behavior in interaction with societal (macro) conditions. This micro-macro approach is summarized in a proposed structural-cognitive model. This is part of the new program of Analytical Criminology. It suggests empirical theory comparison, process explanations and micro-macro explanations.

The book is not only written for readers who are interested in theories of crime and deviant behavior. It is also a treatise in "analytical" (i.e. rigorous) theory construction and empirical theory comparison.

2 The concept of crime, the definition of "theory," and the characteristics of a good theory

3 The theory chaos in criminology

4 The explanation of individual behavior in the social context: the wide version of

rational choice theory as the theoretical foundation of Analytical Criminology

5 How criminological theories can and should be integrated. The program of comparative theory integration and theory testing

7. Some propositions of the labeling approach

10. The origin and working of the Sicilian Mafia: a comparison of a rational choice

Karl-Dieter Opp is Professor Emeritus at the University of Leipzig (Germany), and Affiliate Professor at the University of Washington (Seattle). His areas of interest include crime and deviant behavior, collective action, political participation and protest, social norms and institutions, rational choice theory and the philosophy of the social sciences. His most recent English book, also published with Routledge, is Theories of Political Protest and Social Movements. A Multidisciplinary Introduction, Critique and Synthesis (2009).