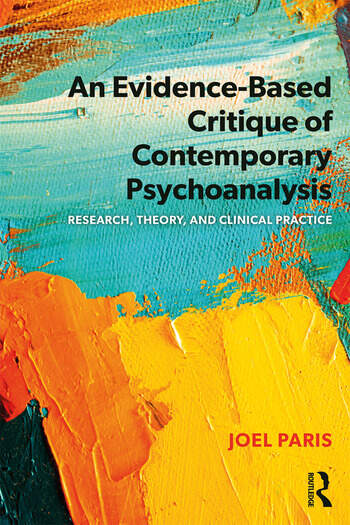 An Evidence-Based Critique of Contemporary Psychoanalysis assesses the state of psychoanalysis in the 21st century. Joel Paris examines areas where analysis needs to develop a stronger scientific and clinical base, and to integrate its ideas with modern clinical psychology and psychiatry.

While psychoanalysis has declined as an independent discipline, it continues to play a major role in clinical thought. Paris explores the extent to which analysis has gained support from recent empirical research. He argues that it could revive its influence by establishing a stronger relationship to science, whilst looking at the state of current research. For clinical applications, he suggests while convincing evidence is lacking to support long-term treatment, brief psychoanalytic therapy, lasting for a few months, has been shown to be relatively effective for common mental disorders. For theory, Paris reviews changes in the psychoanalytic paradigm, most particularly the shift from a theory based largely on intrapsychic mechanisms to the more interpersonal approach of attachment theory. He also reviews the interfaces between psychoanalysis and other disciplines, ranging from "neuropsychoanalysis" to the incorporation of analytic theory into post-modern models popular in the humanities.

An Evidence-Based Critique of Contemporary Psychoanalysis

concludes by examining the legacy of psychoanalysis and making recommendations for integration into broader psychological theory and psychotherapy. It will be of great interest to psychoanalysts, psychoanalytic psychotherapists, and scholars and practitioners across the mental health professions interested in the future and influence of the field.

Part I : Psychoanalysis and Science

Chapter 4: The Road to Integration

Part II: The Boundaries of Psychoanalysis

Chapter 8: Psychoanalysis Beyond the Clinic

Chapter 10: The Legacy of Psychoanalysis

Joel Paris is Emeritus Professor of Psychiatry and a former Department Chair at McGill University, Montreal, Canada. His research interest is in borderline personality disorder and he is author of over 200 peer-reviewed articles, more than 20 books, and over 50 book chapters.

"Written by one of the great integrative thinkers in contemporary psychiatry, Joel Paris’s Evidence Based Critique of Contemporary Psychoanalysis provides a roadmap for reinvigorating psychoanalytic theory and therapy. This compelling and thought-provoking book blends clinical wisdom with incisive analysis of empirical findings to provide a unique perspective on the challenges that lie ahead as we develop a rigorous evidence-based approach to psychoanalysis. Of interest to early career therapists and seasoned professionals alike, this book should be on every clinician’s shelf."-Robert F. Bornstein, Ph.D., Professor, Derner School of Psychology, Adelphi University, USA