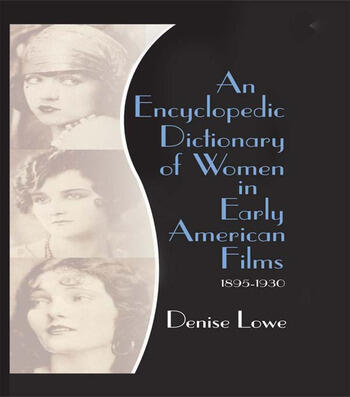 An Encyclopedic Dictionary of Women in Early American Films: 1895-1930

Examine women’s contributions to film—in front of the camera and behind it!

An Encyclopedic Dictionary of Women in Early American Films: 1895-1930 is an A-to-Z reference guide (illustrated with over 150 hard-to-find photographs!) that dispels the myth that men dominated the film industry during its formative years. Denise Lowe, author of Women and American Television: An Encyclopedia, presents a rich collection that profiles many of the women who were crucial to the development of cinema as an industry—and as an art form. Whether working behind the scenes as producers or publicists, behind the cameras as writers, directors, or editors, or in front of the lens as flappers, vamps, or serial queens, hundreds of women made profound and lasting contributions to the evolution of the motion picture production.

An Encyclopedic Dictionary of Women in Early American Films: 1895-1930 gives you immediate access to the histories of many of the women who pioneered the early days of cinema—on screen and off. The book chronicles the well-known figures of the era, such as Alice Guy, Mary Pickford, and Francis Marion but gives equal billing to those who worked in anonymity as the industry moved from the silent era into the age of sound. Their individual stories of professional success and failure, artistic struggle and strife, and personal triumph and tragedy fill in the plot points missing from the complete saga of Hollywood’s beginnings.

An Encyclopedic Dictionary of Women in Early American Films: 1895-1930