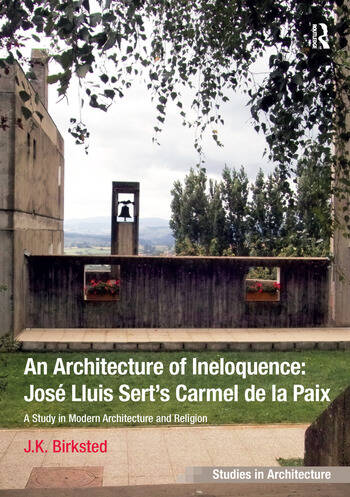 Set on a hillside near Cluny, in a region associated with religious institutions and sacred architecture (including Le Corbusier's La Tourette), Le Carmel de la Paix, designed by José Luis Sert, remains tranquilly unvisited and quietly erased from architectural history. Why? This unusual convent falls outside the standard categories of Sert's architecture and has been overlooked in most publications about his work. As J.K. Birksted explains, the design and construction process for this building proved nightmarish, resulting in a building which, at first sight, appears to be 'ineloquent'. This first detailed examination of this building shows how the convent and the story of its creation offer valuable and important new insights into Sert, his architecture and his life. However, the study also opens up discussions on wider subjects such as the relationships between modernist architecture and ecclesiastical architecture. The design and construction of the Carmel de la Paix (1968-1972) followed the Second Ecumenical Council of the Vatican (1962-1965), which introduced fundamental changes and proposals for renewing the relationship between the Church and the changing modern world and the convent provides an interesting illustration of this period. In addition, it offers insights into the fascinating world of the Carmelite order and its specific liturgical requirements, and, reflecting on the nuns' active involvement in the design and construction process, it also explores wider issues of women in architecture.

'Ultimately, Sert and his client produced an architectural work that Birksted describes as ineloquent,� a word he uses to convey muteness, blankness, emptiness, devoid of the symbols and pomp that one typically associates with religious architecture. This is as the nuns wished their convent to be-simple, spare, ordinary, ascetic-in order to prepare oneself for the divine.' Journal of Architectural Education