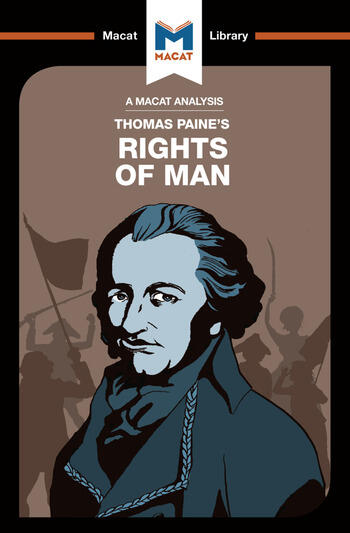 An Analysis of Thomas Paine's Rights of Man

Thomas Paine’s 1791 Rights of Man is an impassioned political tract showing how the critical thinking skills of evaluation and reasoning can, and must, be applied to contentious issues.

Divided into two parts, Rights of Man is, first, a response to Edmund Burke’s arguments against the French Revolution, put forward in his Reflections on the Revolution in France – also available in the Macat Library – and, second, an argument for how to run a fair and just society. The first part is a sustained performance in evaluation: Paine takes Burke’s arguments, and systematically exposes the ways in which Burke’s reasons against revolution are inadequate compared to the necessity of having a just society run according to a universal notion of people’s rights as individuals. The second part turns to an examination of different political systems, setting out a powerfully-structured argument for universal rights, a clear constitution enshrined in law, and a universal right to vote.

Though Paine is in many ways a stronger rhetorician than he is a clear thinker, his reasons for preferring democracy to hereditary forms of government are compelling, coherent and clear. Rights of Man is a masterclass in how to use good reasoning to present a persuasive argument.

Who was Thomas Paine?

What does Rights of Man Say?

Why does Rights of Man Matter?

Mariana Assis is a doctoral candidate at the New School for Social Reasearch, New York.

An Analysis of Thomas Paine's Rights of Man