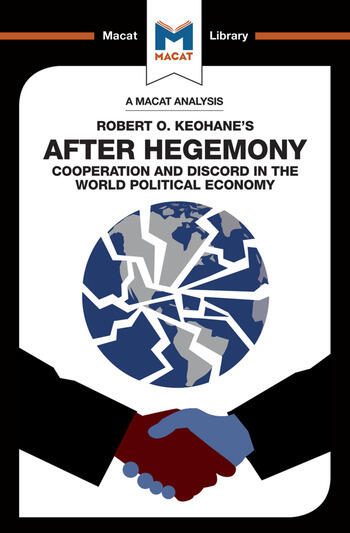 An Analysis of Robert O. Keohane's After Hegemony

Robert O. Keohane’s After Hegemony is both a classic of international relations scholarship and an example of how creative thinking can help shed new light on the world.

Since the end of World War II, the global political landscape had been dominated by two superpowers, the USA and the USSR, and the tense stand-off of the Cold War. But, as the Cold War began to thaw, it became clear that a new global model might emerge. The commonly held belief amongst those studying international relations was that it was impossible for nations to work together without the influence of a hegemon (a dominant international power) to act as both referee and ultimate decision-maker. This paradigm – neorealism – worked on the basis that every nation will do all it can to maximize its power, with such processes only checked by a balance of competing powers.

Keohane, however, examined the evidence afresh and came up with novel explanations for what was likely to come next. He went outside the dominant paradigm, and argued for what came to be known as the neoliberal conception of international politics.

States, Keohane said, can and will cooperate without the influence of a hegemonic power, so long as doing so brings them absolute gains in the shape of economic and cultural benefits. In Keohane’s highly-creative view, the pursuit of national self-interest leads naturally to international cooperation – and to the formation of global regimes (such as the United Nations) that can reinforce and foster it.

Who was Robert O. Keohane?

What does After Hegemony Say?

Why does After Hegemony Matter?

Dr. Ramon Pacheco Pardo is Senior Lecturer in International Relations at King’s College London. He holds a PhD in International Relations form the London School of Economics and is a research associate at the Lau China Institute and the Global Studies Institute in Hong Kong. Dr Pacheco Pardo has held visiting positions at the Lee Kuan Yew School of Public Policy and Korea University, and sits on the editorial board of Global Studies Journal.

An Analysis of Robert O. Keohane's After Hegemony