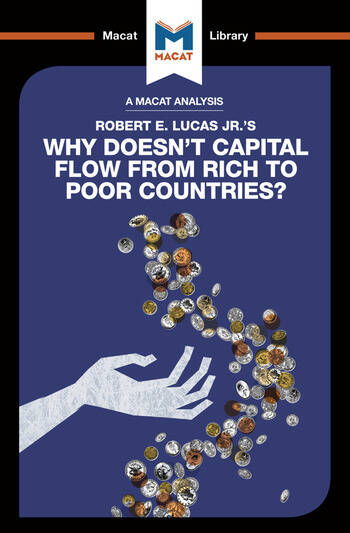 An Analysis of Robert E. Lucas Jr.'s Why Doesn't Capital Flow from Rich to Poor Countries?

Robert Lucas is known among economists as one of the most influential macroeconomists of recent times – a reputation founded in no small part on the critical thinking skills displayed in his seminal 1990 paper ‘Why Doesn’t Capital Flow from Rich to Poor Countries?’

Lucas’s paper tackles a puzzle in economic theory that has since come to be known as the ‘Lucas paradox,’ and it deploys the author’s brilliant problem solving skills to explain why such an apparent paradox in fact makes sense. Classical economic theory makes a simple prediction of how capital flows between countries: it should, it states, flow from rich to poor countries, because of the law of diminishing returns on capital. Since poor countries have so little capital invested in them, the returns on new investment should be proportionally far better than investment in rich countries.

This should mean that investors seeking new opportunities will invest in poorer countries, making capital consistently flow from rich nations to poorer ones. But, problematically, this is not in fact the case. Having defined the problem, Lucas did what any good problem solver would: he looked critically at the criteria involved, and offered a series of possible solutions. Indeed, in just six pages, he puts forward four hypotheses to explain the paradox’s existence. The popularity of his paper, and the influence it has had, are also greatly magnified by careful reasoning embodied in Lucas’s marshalling of evidence and his explanations of the judgements he has made.

Who was Robert E. Lucas Jr.?

What does Why Doesn't Capital Flow from Rich to Poor Countries? Say?

Why does Why Doesn't Capital Flow from Rich to Poor Countries? Matter?

Pádraig Belton is completing his doctoral research in politics and international relations at the University of Oxford. A prolific financial, business and political journalist, his work has appeared in publications including the Irish Times, the Guardian, Telegraph, Independent, the Irish Independent, The Atlantic, the New Statesman, Prospect, the Times Literary Supplement, and Foreign Policy, as well as via the BBC.

An Analysis of Robert E. Lucas Jr.'s Why Doesn't Capital Flow from Rich to Poor Countries?