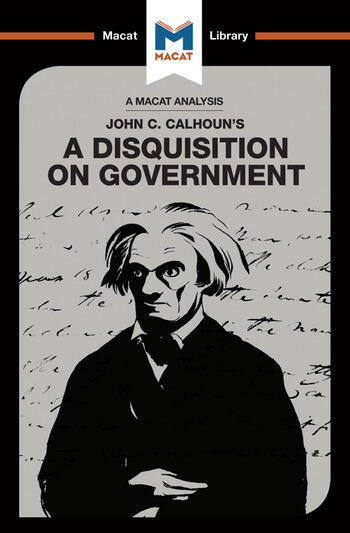 An Analysis of John C. Calhoun's A Disquisition on Government

Nineteenth-century American politician John C. Calhoun occupies a paradoxical place in the history of political thought – and of critical thinking.

On one hand, he is remembered as a committed advocate of slavery, consistently espousing views that are now considered indefensible and abhorrent. On the other, the political theories that Calhoun used to defend the social injustice of slavery have become the basis of the very systems by which modern democracies defend minority rights.

Despite being crafted in defence of a system as unjust as slavery, the arguments that Calhoun expressed about minority rights in democracies in A Disquisition On Government remain an excellent example of how problem solving skills and reasoning can come together. The problem, for Calhoun, was both specific and general. As matters stood in the late 1840s, the majority of American states were anti-slavery, with only the minority, Southern states remaining pro-slavery. This boiled down to a crucial issue with democracy: the US government should not, Calhoun argued, only respect the wishes of the majority. Instead, democratic government must aim to harmonize diverse groups and their interests – governing, in so far as possible, for everyone. His analysis of how the Southern states could protect what he saw as their right to keep slaves led Calhoun to formulate solutions to the problem of ‘the tyranny of the majority’ that have since helped defend far worthier minority views.

Who was John C. Calhoun?

What does A Disquisition on Government Say?

Why does A Disquisition on Government Matter?

Etienne Stockland is researching a PhD in Environmental History at Columbia University.

An Analysis of John C. Calhoun's A Disquisition on Government