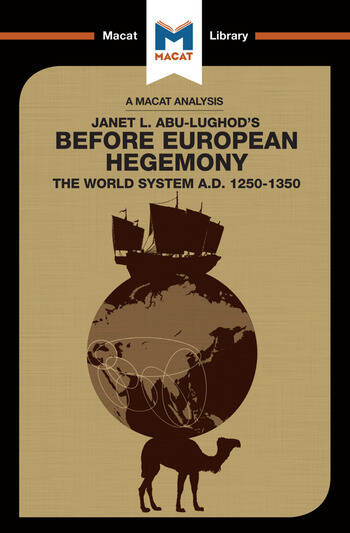 An Analysis of Janet L. Abu-Lughod's Before European Hegemony: The World System A.D. 1250-1350

The modern vision of the world as one dominated by one or more superpowers begs the question of how best to understand the world-system that existed before the rise of the first modern powers.

Janet Abu-Lughod's solution to this problem, in this highly influential work, is that Before European Hegemony, a predominantly insular, agrarian world was dominated by groups of mercantile city-states that traded with one another on equal terms across a series of interlocking areas of influence. In this reading of history, China and Japan, the kingdoms of India, Muslim caliphates, the Byzantine Empire and European maritime republics alike enjoyed no absolute dominance over their neighbours and commercial partners – and the egalitarian international trading network that they built endured until European advances in weaponry and ship types introduced radical instability to the system.

Abu-Lughod's portrait of a more balanced world is a masterpiece of synthesis driven by one highly creative idea: her world system of interlocking spheres of influence quite literally connected masses of evidence together in new ways. A triumph of fine critical thinking.

Who was Janet L. Abu-Lughod?

What does Before European Hegemony Say?

Why does Before European Hegemony Matter?

An Analysis of Janet L. Abu-Lughod's Before European Hegemony: The World System A.D. 1250-1350