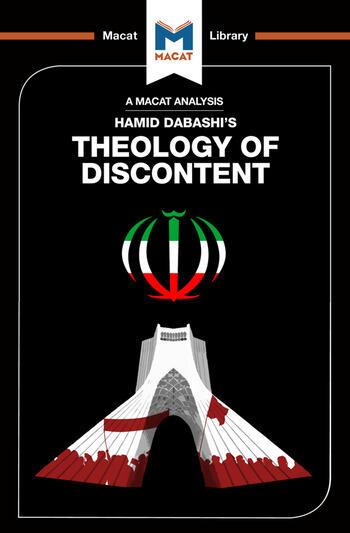 An Analysis of Hamid Dabashi's Theology of Discontent: The Ideological Foundation of the Islamic Revolution in Iran

Hamid Dabashi’s 1997 work Theology of Discontent reveals a creative thinker capable not only of understanding how an argument is built, but also of redefining old issues in new ways. The Iranian Revolution of 1978–9 was front-page news in the West, and in some ways remains so today. Though it was an uprising against authoritarian royal rule, with a coalition of modernisers and Islamists, the revolution saw the birth of a new Islamic Republic that seemed to reject pro-Western democracy. Dabashi wanted to analyze the real reasons for this change, while examining how Islamic ideologies contributed to the revolution and the republic that followed.

Theology of Discontent examines different Islamic thinkers, analyzing how views with seemingly little in common contributed to the modern Iranian belief system. Beyond its insightful analytical dissection of these eight thinkers, Theology of Discontent also shows Dabashi’s creative thinking skills. Reframing the debates about Iran’s relationship with the West, he traced the ways in which Iranian identity formed in reactive opposition to Western ideas. In many ways, Dabashi suggested, Iran was trapped in a cycle of deliberately asserting its difference from the West, a process that was fundamental to the development of its own unique brand of revolutionary Islamism.

What does Theology of Discontent: The Ideological Foundation of the Islamic Revolution in Iran Say?

Why does Theology of Discontent: The Ideological Foundation of the Islamic Revolution in Iran Matter?

An Analysis of Hamid Dabashi's Theology of Discontent: The Ideological Foundation of the Islamic Revolution in Iran