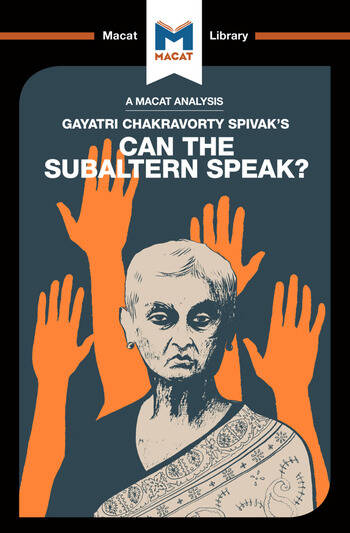 An Analysis of Gayatri Chakravorty Spivak's Can the Subaltern Speak?

A critical analysis of Spivak's classic 1988 postcolonial studies essay, in which she argues that a core problem for the poorest and most marginalized in society (the subalterns) is that they have no platform to express their concerns and no voice to affect policy debates or demand a fairer share of society’s goods.

A key theme of Gayatri Spivak's work is agency: the ability of the individual to make their own decisions. While Spivak's main aim is to consider ways in which "subalterns" – her term for the indigenous dispossessed in colonial societies – were able to achieve agency, this paper concentrates specifically on describing the ways in which western scholars inadvertently reproduce hegemonic structures in their work.

Spivak is herself a scholar, and she remains acutely aware of the difficulty and dangers of presuming to "speak" for the subalterns she writes about. As such, her work can be seen as predominantly a delicate exercise in the critical thinking skill of interpretation; she looks in detail at issues of meaning, specifically at the real meaning of the available evidence, and her paper is an attempt not only to highlight problems of definition, but to clarify them.

What makes this one of the key works of interpretation in the Macat library is, of course, the underlying significance of this work. Interpretation, in this case, is a matter of the difference between allowing subalterns to speak for themselves, and of imposing a mode of "speaking" on them that – however well-intentioned – can be as damaging in the postcolonial world as the agency-stifling political structures of the colonial world itself. By clearing away the detritus of scholarly attempts at interpretation, Spivak takes a stand against a specifically intellectual form of oppression and marginalization.

Who is Gayatri Chakravorty Spivak?

What does Can the Subaltern Speak Say?

Why does Can the Subaltern Speak Matter?

Dr Graham Riach holds a PhD from Emmanuel College, Cambridge, on contemporary South African literature. A specialist in postcolonial literature, he currently teaches at the University of Oxford.

An Analysis of Gayatri Chakravorty Spivak's Can the Subaltern Speak?