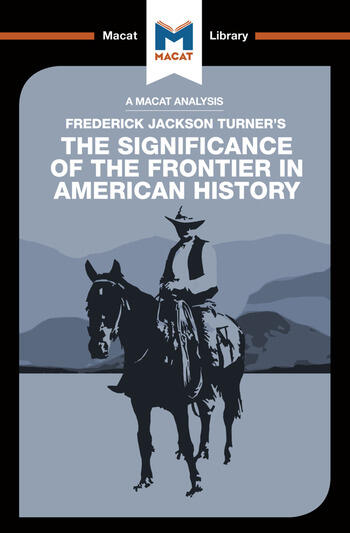 Frederick Jackson Turner's 1893 essay on the history of the United States remains one of the most famous and influential works in the American canon.

That is a testament to Turner's powers of creative synthesis; in a few short pages, he succeeded in redefining the way in which whole generations of Americans understood the manner in which their country was shaped, and their own character moulded, by the frontier experience. It is largely thanks to Turner's influence that the idea of America as the home of a sturdily independent people – one prepared, ultimately, to obtain justice for themselves if they could not find it elsewhere – was born. The impact of these ideas can still be felt today: in many Americans' suspicion of "big government," in their attachment to guns – even in Star Trek's vision of space as "the final frontier." Turner's thesis may now be criticised as limited (in its exclusion of women) and over-stated (in its focus on the western frontier). That it redefined an issue in a highly impactful way – and that it did so exceptionally eloquently – cannot be doubted.

Who was Frederick Jackson Turner?

What does The significance of the frontier in American history Say?

Why does The significance of the frontier in American history Matter?

Dr Joanna Dee Das holds a PhD in history from Columbia University. She has taught at Barnard College and Stanford University, and currently teaches at Washington University in St Louis.

Dr Joseph Tendler received his PhD from the University of St Andrews. He is a specialist in historiography, the study of how history is conceived and written, and is the author of Opponents of the Annales School.