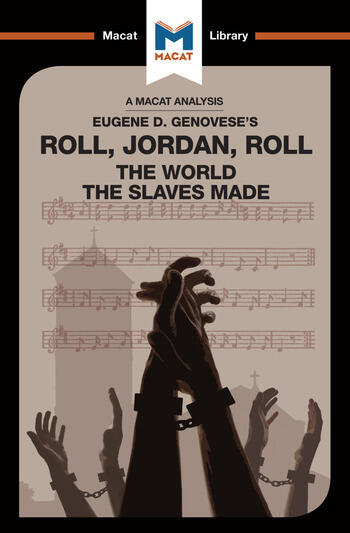 An Analysis of Eugene Genovese's Roll, Jordan, Roll: The World the Slaves Made

Most studies of slavery are underpinned by ideology and idealism. Eugene Genovese's ground-breaking book takes a stand against both these influences, arguing not only that all ideological history is bad history – a remarkable statement, coming from a self-professed Marxist – but also that slavery itself can only be understood if master and slave are studied together, rather than separately.

Genovese's most important insight, which makes this book a fine example of the critical thinking skill of problem-solving, is that the best way to view the institution of American slavery is to understand why exactly it was structured as it was. He saw slavery as a process of continual renegotiation of power balances, as masters strove to extract the maximum work from their slaves, while slaves aimed to obtain acknowledgement of their humanity and the ability to shape elements of the world that they were forced to live in.

Genovese's thesis is not wholly original; he adapts Gramsci's notion of hegemony to re-interpret the master-slave relationship – but it is an important example of the benefits of asking productive new questions about topics that seem, superficially at least, to be entirely obvious. By focusing on slave culture, rather than producing another study of economic determinism, this massive study succeeds in reconceptualising an institution in an exciting new way.

Who was Eugene Genovese?

What does Roll, Jordan, Roll: The World the Slaves Made Say?

Why does Roll, Jordan, Roll: The World the Slaves Made Matter?

Dr Cheryl Hudson holds a PhD in History from Vanderbilt University, where her work examined the Political Culture of Chicago, 1890-1930. Currently a University Teacher in American history at the University of Liverpool, she has taught at universities in the UK and the USA, including Oxford, Sheffield, Coventry, Vanderbilt, Sussex and Kent, and is a former director of the academic programme at the Rothermere American Institute, University of Oxford.

Dr Eva Namusoke took her PhD in History from the University of Cambridge with work focusing on the History of the Church in Twentieth-Century Uganda. She is currently a research fellow at the Institute of Commonwealth Studies, at the School of Advanced Study, University of London.

An Analysis of Eugene Genovese's Roll, Jordan, Roll: The World the Slaves Made