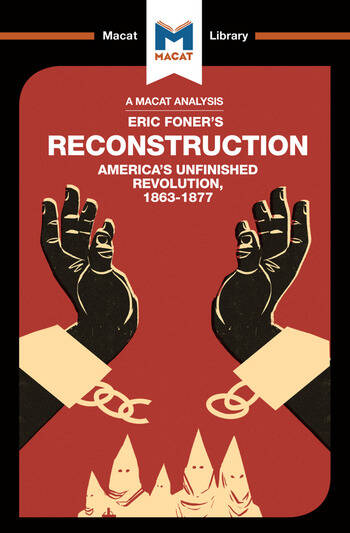 ‘Reconstruction’ is the name given to the period that, beginning shortly before the end of the American Civil War and running until 1877, saw the frustration of federal government's attempts to integrate the newly freed slaves into the American political and economic system. It ended in frustration, disillusionment and also violence, with individual southern states denying rights to freed slaves, preventing them from voting, and largely forcing them back into roles that exploited their labor and prevented them from gaining access to education.

For much of the 20th century, the predominant view of the Reconstruction period was that of the Dunning School, which argued that former slaves were unprepared for the responsibilities of voting and holding office, and that it was their incapability of handling such responsibilities – and not the racist actions of whites – that was largely responsible for the failures of the Reconstruction period. Eric Foner's great work reverses those judgements. Foner adopts a problem-solving approach, asking productive questions of state archives and generating and assessing alternative possibilities to assess the views of the Dunning School in a much wider context. His verdict – that slaves and freedmen were often key figures who shaped the eventual emergence of a more progressive American democracy – is backed up by persuasive reasoning which explains how these results came about and shows how the white establishment, led by President Andrew Johnson, was primarily responsible for the disasters of the Reconstruction era.

Who was Eric Foner?

What does Reconstruction Say?

What does Reconstruction Matter?