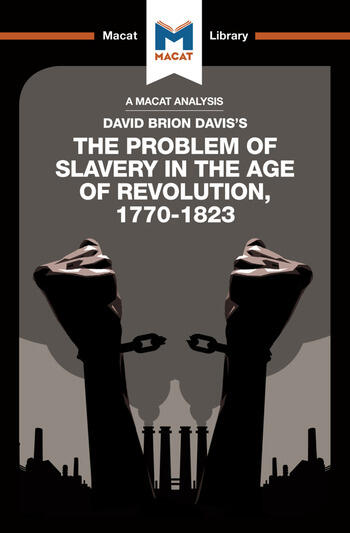 An Analysis of David Brion Davis's The Problem of Slavery in the Age of Revolution, 1770-1823

How was it possible for opponents of slavery to be so vocal in opposing the practice, when they were so accepting of the economic exploitation of workers in western factories – many of which were owned by prominent abolitionists? David Brion Davis's The Problem of Slavery in the Age of Revolution, 1770-1823, uses the critical thinking skill of analysis to break down the various arguments that were used to condemn one set of controversial practices, and examine those that were used to defend another. His study allows us to see clear differences in reasoning and to test the assumptions made by each argument in turn. The result is an eye-opening explanation that makes it clear exactly how contemporaries resolved this apparent dichotomy – one that allows us to judge whether the opponents of slavery were clear-eyed idealists, or simply deployers of arguments that pandered to their own base economic interests.

Who was David Brion Davis?

Dr Duncan Money holds a DPhil in History from the University of Oxford, with research focusing on mining in the African Copperbelt. He is currently a Postdoctoral Research Fellow at the International Studies Group, University of the Free State in South Africa.

An Analysis of David Brion Davis's The Problem of Slavery in the Age of Revolution, 1770-1823