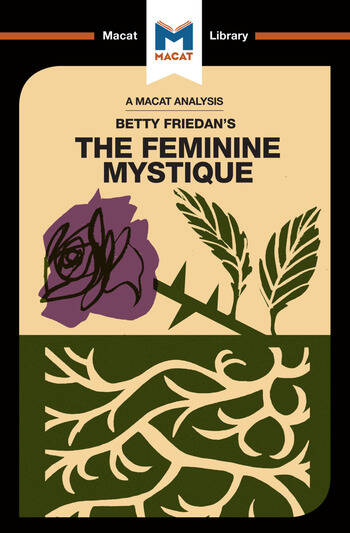 An Analysis of Betty Friedan's The Feminine Mystique

Betty Friedan's book The Feminine Mystique is possibly the best-selling of all the titles analysed in the Macat library, and arguably one of the most important. Yet it was the product of an apparently minor, meaningless assignment. Undertaking to approach former classmates who had attended Smith College with her, 10 years after their graduation, the high-achieving Friedan was astonished to discover that the survey she had undertaken for a magazine feature revealed a high proportion of her contemporaries were suffering from a malaise she had thought was unique to her: profound dissatisfaction at the ‘ideal’ lives they had been living as wives, mothers and homemakers.

For Friedan, this discovery stimulated a remarkable burst of creative thinking, as she began to connect the elements of her own life together in new ways. The popular idea that men and women were equal, but different – that men found their greatest fulfilment through work, while women were most fulfilled in the home – stood revealed as a fallacy, and the depression and even despair she and so many other women felt as a result was recast not as a failure to adapt to a role that was the truest expression of femininity, but as the natural product of undertaking repetitive, unfulfilling and unremunerated labor.

Friedan's seminal expression of these new ideas redefined an issue central to many women's lives so successfully that it fuelled a movement – the ‘second wave’ feminism of the 1960s and 1970s that fundamentally challenged the legal and social framework underpinning an entire society.

Who was Betty Friedan?

What does The Feminine Mystique Say?

Why does The Feminine Mystique Matter?

Dr Elizabeth Whitaker holds a PhD in anthropology from Emory University. She has taught at several American universities and is currently a senior lecturer at the Università degli Studi di Bologna, Italy. In addition to a forthcoming book on anthropology for a general audience, she is the author of Measuring Mamma’s Milk: Fascism and the Medicalization of Maternity in Italy (Ann Arbor: University of Michigan Press, 2000).

An Analysis of Betty Friedan's The Feminine Mystique