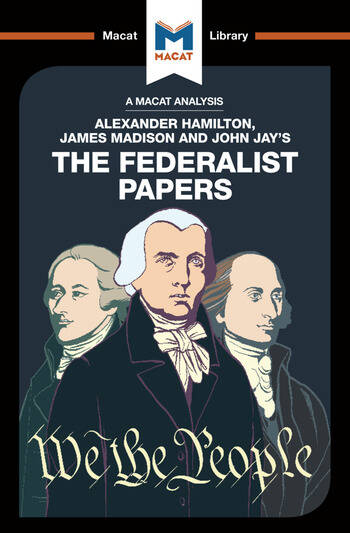 An Analysis of Alexander Hamilton, James Madison, and John Jay's The Federalist Papers

The 85 essays that maker up The Federalist Papers’ clearly demonstrate the vital importance of the art of persuasion. Written between 1787 and 1788 by three of the “Founding Fathers” of the United States, the Papers were written with the specific intention of convincing Americans that it was in their interest to back the creation of a strong national government, enshrined in a constitution – and they played a major role in deciding the debate between proponents of a federal state, with its government based on central institutions housed in a single capital, and the supporters of states’ rights.

The papers’ authors – Alexander Hamilton, James Madison, and John Jay – believed that centralised government was the only way to knit their newborn country together, while still preserving individual liberties. Closely involved with the politics of the time, they saw a real danger of America splintering, to the detriment of all its citizens.

Given the fierce debates of the time, however, Hamilton, Jay and Madison knew they had to persuade the general public by advancing clear, well-structured arguments – and by systematically engaging with opposing points of view. By enshrining checks and balances in a constitution designed to protect individual liberties, they argued, fears that central government would oppress the newly free people of America would be allayed.

The constitution that the three men helped forge governs the US to this day, and it remains the oldest written constitution, still in force, anywhere in the world.

Who were Alexander Hamilton, James Madison, and John Jay?

What does The Federalist Papers Say?

Dr Jeremy Kleidosty received his PhD in international relations from the University of St Andrews. He is currently a postdoctoral fellow at the University of Jväskylä, and is the author of The Concert of Civilizations: The Common Roots of Western and Islamic Constitutionalism.

An Analysis of Alexander Hamilton, James Madison, and John Jay's The Federalist Papers