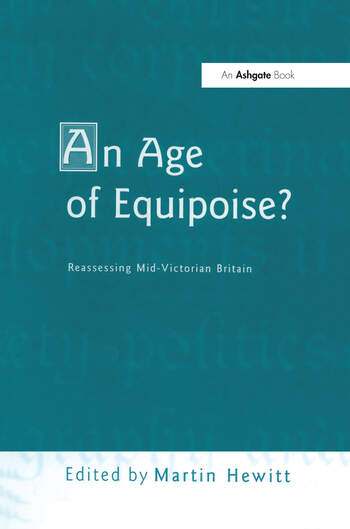 The Age of Equipoise by W.L Burn was published in 1964 and became a central text in the canon of interpretations of the Victorian period. The book subsequently fell out of favour but recent claims to establish a new interpretative standard have, paradoxically, prompted reviewers to cast back to Burn's work as the orthodox standard against which such claims should be judged. The essays in this volume by British and American contributors all engage, to varying degrees, with the notion of 'equipoise' and how it can help to illuminate the mid-Victorian period in ways which alternative formulations cannot. Some of the chapters develop arguments embedded in Burn's own book; others take up issues largely absent in The Age of Equipoise, such as the position of children, Britain's interaction with the wider world, and the threats the period experienced to its concept of masculine identity. Together the essays demonstrate the intricacy and turbulence of the forces of cohesion in Victorian society, along with the success of that culture in achieving a working, if shifting, modus vivendi. Moreover, they substantiate the argument that, whatever the limitations of Burn's work, 'equipoise' deserves rehabilitation as a powerful conceptual framework for making sense of mid-Victorian Britain. About the Editor: Martin Hewitt is Director of the Leeds Centre for Victorian Studies and editor of the Journal of Victorian Culture. With Robert Poole he has recently produced an edition of The Diaries of Samuel Bamford, 1858-61 (Sutton, 2000).

Contents: Prologue: re-assessing The Age of Equipoise, Martin Hewitt; Equipoise and its discontents: voices of dissent during the international exhibitions, Peter H. Hoffenberg; Equipoise and the object: the South Kensington Museum, Tim Barringer; Spectacular failures: Thomas Hopley, Wilkie Collins and the reconstruction of Victorian masculinity, Sheila Sullivan; Democracy and the mid-Victorians, Roland Quinault; Equipoise and the myth of an open élite: new men of wealth and the purchase of land in the equipoise decades, 1850-69, David Brown; Domesticity: a legal discipline for men?, Martin J. Wiener; Helps and Ruskin in the age of equipoise, Stephen L. Keck; ’The hand of the Lord is upon the cattle’: religious reactions to the cattle plague, 1865-67, Matthew Cragoe; Sensational imbalance: the child acrobat and the mid-Victorians, Brenda Assael; Harbouring discontent: British imperialism through Brazilian eyes in the Christie affair, Ross G. Forman; Index.