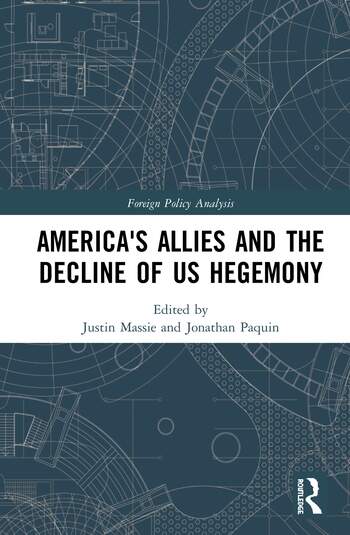 America's Allies and the Decline of US Hegemony

How do America’s democratic allies perceive and respond to a relative decline in US power and influence and the simultaneous rise of China? Using the case-studies of Europe, the UK, Australia, Canada, Japan and South East Asian countries, this book offers a broad assessment of the perceptions of threat and the strategies used by these allies to cope with the relative decline of America’s hegemonic power, the rise of China and the transforming world order.

In answering these central questions, contributors focus on two complementary analytical approaches. The first examines the perceptions of systemic changes by America’s allies: how are US allies framing this issue and what kind of political discourse is emerging with regards to it? The second approach focuses on the concrete foreign policy and defence strategies put forward by these allies. The book explores the extent to which US allies are willing to support US hegemony and considers the democratic allies’ understanding of the international structure, their relations to the United States, and their own aspirations in this changing world order.

This book will be of interest to general readers as well as scholars and students of US foreign policy, foreign policy analysis and International Relations.

Part I: Debating US Decline and Power Transition

Chapter 7 - Canada’s Middle Power Ambivalence: The Palimpsest of US Power Under the Chinese Shadow

Conclusion: Allies and the Fate of U.S. Hegemony

Justin Massie is Associate Professor of political science at the University of Quebec in Montreal, Canada, and Senior Fellow at the Canadian International Council.

Jonathan Paquin is Professor of Political Science at Université Laval.

America's Allies and the Decline of US Hegemony