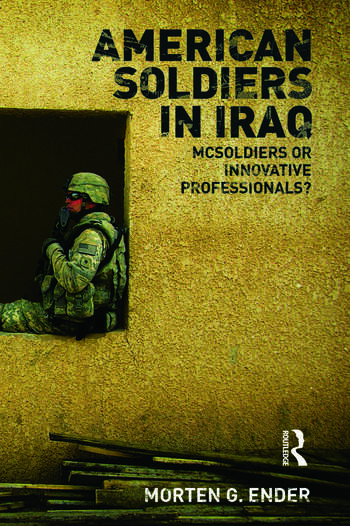 American Soldiers in Iraq offers a unique snapshot of American soldiers in Iraq, analyzing their collective narratives in relation to the military sociology tradition.

Grounded in a century-long tradition of sociology offering a window into the world of American soldiers, this volume serves as a voice for their experience. It provides the reader with both a generalized and a deep view into a major social institution in American society and its relative constituents-the military and soldiers-during a war. In so doing, the book gives a backstage insight into the U.S. military and into the experiences and attitudes of soldiers during their most extreme undertaking-a forward deployment in Iraq while hostilities are intense.

The author triangulates qualitative and quantitative field data collected while residing with soldiers in Iraq, comparing and contrasting various groups from officers to enlisted soldiers, as well as topics such as boredom, morale, preparation for war, day-to-day life in Iraq, attitudes, women soldiers, communication with the home-front, "McDonaldization" of the force, civil-military fusion, the long-term impact of war, and, finally, the socio-demographics of fatalities. The heart of American Soldiers in Iraq captures the experiences of American soldiers deployed to Operation Iraqi Freedom at the height of the conflict in a way unprecedented in the literature to date.

This book will be essential reading for students of military studies, sociology, American politics and the Iraq War, as well as being of much interest to informed general readers.

Morten G. Ender is Professor of Sociology at the United States Military Academy at West Point, New York. His research on military sociology has appeared in the Journal of Adolescence, Military Psychology, Journal of Political and Military Sociology, and Armed Forces & Society.