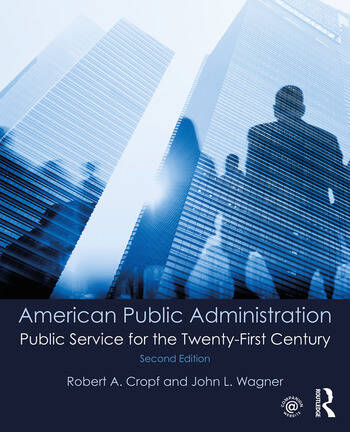 American Public Administration has been the go-to introductory textbook for Public Administration courses with a focus on civil society for the last decade. Now in an extensively revised and updated second edition, authors Cropf and Wagner weave the most recent and compelling research throughout every chapter to give students a useful, in-depth understanding of the field today. Changes to this edition include:

Comprehensive, well-written, and offering a careful consideration of the fundamentals, American Public Administration, Second Edition is an ideal introductory text for courses at the undergraduate or graduate level, offering students a broader civil society context in which to understand public service.

1. Public Service in the Twenty-First Century

2. The Growth of Government and Administration

7. Theories of Organization and Public Administration

8. The Organizational Dimensions of Public Administration

Robert A. Cropf is Director of the MPA program and Professor in the Department of Political Science at Saint Louis University, USA. He is the author of six books on public administration and policy.