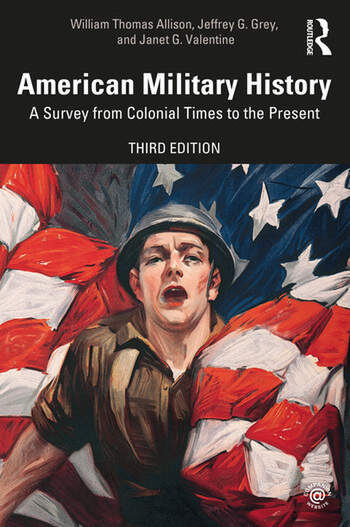 American Military History: A Survey From Colonial Times to the Present

Now in its third edition, American Military History examines how a country shaped by race, ethnicity, economy, regionalism, and power has been equally influenced by war and the struggle to define the role of a military in a free and democratic society.

Organized chronologically, the text begins at the point of European conflict with Native Americans and concludes with military affairs in the early 21st century, providing an important overview of the military’s role on an international, domestic, social, and symbolic level. The third edition is fully updated to reflect recent developments in military policy and the study of military history and war and society, thus providing students a foundational understanding of the American military experience.

This book will be of interest to students of American history and military history. It is designed to allow instructors flexibility in structuring a course.

Chapter 2 The Colonies and Wars for Empire

Chapter 3 Independence and the Birth of a National Military

Chapter 4 Challenges for a New Nation

Chapter 5 The Second War of Independence

Chapter 7 Toward a Professional Military

Chapter 14 Challenges of the Cold War

Chapter 16 Reform and Adjustment for a Changing World

Chapter 17 Into the Twenty-First Century

William Thomas Allison is Professor of History at Georgia Southern University. He earned his Ph.D. at Bowling Green State University and teaches courses on American military history, the Vietnam War, and war and society. He has been a visiting professor at the U.S. Air Force Air War College, the U.S. Air Force Command and Staff College, and the U.S. Army War College, and has served on the editorial board of the Journal of Military History, on the U.S. Army Historical Advisory Committee, and as vice-president of the Society for Military History. He is the author of several works, including Military Justice in Vietnam: The Rule of Law in an American War, My Lai: An American Tragedy, and The Gulf War, 1991, and is the series editor for Modern War Studies at the University Press of Kansas.

The late Jeffrey G. Grey was Professor of History at the Australian Defence Force Academy. He earned his Ph.D. at the University of New South Wales and has held several visiting professorships, including the Major General Matthew Horner Chair in Military Theory at the U.S. Marine Corps University. His numerous publications include The Commonwealth Armies and the Korean War: An Alliance Study, A Military History of Australia Australian Brass: The Career of Lieutenant-General Sir Horace Robertson, and "Up Top": The Royal Australian Navy in Southeast Asian Conflicts, 1955-1972, as well as volumes for the Centenary History of Australia and the Great War series. He served as president of the Society for Military History and on the editorial boards of the Journal of Military History, the Journal of the Australian War Memorial, War in History, and the Australian Army Journal, as well as editor for War and Society.

American Military History: A Survey From Colonial Times to the Present