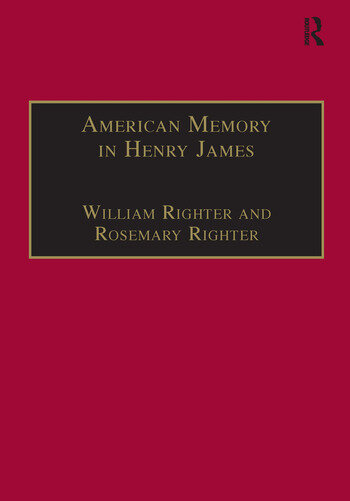 American Memory in Henry James is about the cultural, historical and moral dislocations at the heart of Henry James' explorations of American identity - between power and love; modernity and history; indeterminate social forms and enduring personal values. The text covers the power, and the limits, of the language of morality and interpretive imagination as James grapples with what America and Europe have in common; and also with what, because their contexts and sense of history are so profoundly different, they cannot have in common. Righter's great theme is the tensions that impelled James ultimately to stretch the novel, his beloved 'prodigious form', almost to breaking point, in search of an ultimately elusive synthesis. The American Scene - his account of an America, revisited after long absence, that was reinventing itself right down to the touchstones of its identity - is its entry point; The Golden Bowl is its primary testing ground. The questions raised transcend the historical moment and the specifically Jamesian sense of dislocation, to go to the heart of modern identity, and the nature of literary endeavour.

Contents: Part 1 America deconstructed: The Jamesian perspective; The composite light; America and the pathos of desire. Part 2 The note of Europe: An encounter in NÃ´tre Dame; 'There to reconstruct'; The comedy of moral terms; Strether's reasons; Values in collision; Nihilism and decorum. Part 3 Amerigo in an American Nowhere: Characters in a void; The shaping of the Prince; Anomalies of place and time. Part 4 A Dark Fable of Love and Power: The perilous equilibrium; The triumph of the will; A map of incommensurablity; Fictive resolutions. Part 5 Form and Contingency: From Portland Place to American City; In the museum; The elusive synthesis; Coda: the 'complex fate'; Bibliography; Index.

William Righter was Reader Emeritus in English Literature at the University of Warwick. His widow Rosemary is currently Associate Editor of The Times, London.

'This is a truly extraordinary work of criticism, and should be read by all Jamesians, and by everyone interested in literature and philosophy, and in the invention of modern America.' Professor Michael Wood, Princeton University, USA 'The late William Righter, [...] in a book posthumously edited by his widow, Rosemary, has subtly examined James's troubled vision of America... Rosemary Righter's editorial achievement in weaving posthumous manuscript pages into a seamless whole is evident from the narrative and its thematic continuity.' English Literature in Transition