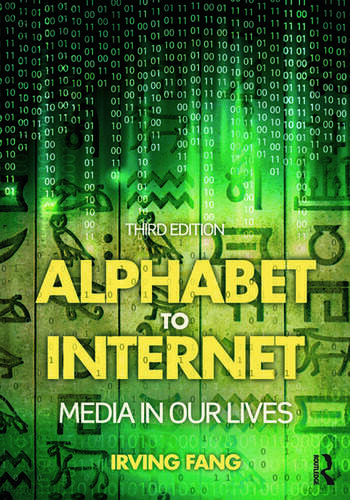 Alphabet to Internet: Media in Our Lives

What Greek philosopher thought writing would harm a student’s memory? Was the poet Byron’s daughter the first computer programmer? Who plays more video games, women over 18 or teenage boys?

In Alphabet to Internet: Media in Our Lives, Irving Fang looks at each medium of communication through the centuries, asking not only, "What happened?" but also, "How did society change because of this new communication medium?" and, "How are we different as a result?"

Examining the impact of different media on a broad, historical scale—among them mass printing, the telegraph, film, the internet, and advertising—Alphabet to Internet takes us from the first scratches of writing and the origins of mail to today's video games, the widespread and daily use of smartphones, and the impact of social media in political uprisings across the globe. A timeline at the end of each chapter places events in perspective and allows students to pinpoint key moments in media history.

Now in its third edition, Alphabet to Internet presents a lively, thoughtful, and accessible introduction to media history.

Introduction   1. Writing: Gathering Knowledge  2. Printing: Reaching More of Us  3. Mail: The Snail that Could  4. Telegraph: Uniting the United States  5. Telephone: Reaching Without Touching  6. Recording: Beyonce Sings Better Than Our Sister  7. Photography: Personal and So Much More  8. Movies: Made by More of Us  9. Radio: Helping Us Through the Rough Years  10. Television: Pictures in Our Parlors  11. Computers: Beyond Calculation  12. The Internet: The World at Our Fingertips  13. Video Games: Leaning Forward  14. Persuasion: The Push Never Stops  15. We Are Different: Living in a World of Social Change

Irving Fang has been a journalist, teacher, author, and publisher. His career has included the Daily Times of Nigeria, Reuters, ABC News, and the University of Minnesota. He wrote the first book about television news skills and possibly the first doctoral dissertation ever printed by computer. He lives in Cambridge, Massachusetts.

Praise for previous editions of Alphabet to Internet (whose first edition was named by Choice as one of the "outstanding academic titles for 2008"):

"This book doesn't plod along. Instead, like a good mystery novel, it hooks readers. Each chapter makes readers eager for the next as Fang brings history to life." —Sue Burzynski Bullard, Journalism and Mass Communication Quarterly

"Encompassing a vast amount of terrain and synthesizing a range of scholarly and popular sources, Fang's Alphabet to Internet will provide readers and instructors with a ready source of information on the historical development of media technologies." —Andrew Salvati, H-Net

"[Fang] offers a remarkable one-volume history tracing the development of mediated communication from the earliest forms of writing to contemporary computer-based communications." —G. A. Mayer, Choice

Alphabet to Internet . . . by Irving Fang is a tour-de-force by the emeritus University of Minnesota journalism professor. . . . The breadth of material here is amazing, ranging from the pre-historic (briefly!) to the plethora of services we have today." —Christopher Sterling, Communication Booknotes Quarterly

Alphabet to Internet: Media in Our Lives