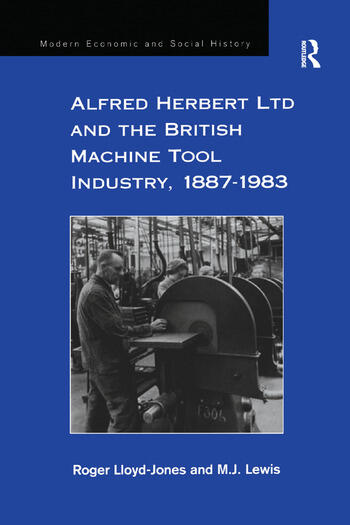 At the beginning of the twentieth century Britain was amongst the world leaders in the production of machine tools, yet by the 1980s the industry was in terminal decline. Focusing on the example of Britain's largest machine tool maker, Alfred Herbert Ltd of Coventry, this study charts the wider fortunes of this vital part of the manufacturing sector. Taking a chronological approach, the book explores how during the late nineteenth century the industry developed a reputation for excellence throughout the world, before the challenges of two world wars necessitated drastic changes and reorganisations. Despite meeting these challenges and emerging with confidence into the post-war market place, the British machine tool industry never regained its pre-eminent position, and increasingly lost ground to foreign competition. By using the example of Alfred Herbert Ltd to illuminate the broader economic and business history of the British machine tool industry, this study not only provides a valuable insight into British manufacturing, but also contributes to the ongoing debates surrounding Britain's alleged decline as a manufacturing nation.

’The twentieth-century machine tool industry remains little explored by historians of technology, despite being central to modern production... Now we have a valuable addition to the literature with Roger Lloyd-Jones and M.J. Lewis's detailed, chronological history of Alfred Herbert Ltd. and the British machine tool industry. Their careful economic analysis raises many tantalizing historical questions about the complex relationships between technological capability, innovation, and economic success... One of the outstanding features of this study is the importance that the authors accord to understanding firms within the 'market-cum-technological environment'.’ Technology and Culture ’... this book is a welcome addition to the literature and we should be grateful to Lloyd-Jones and Lewis for their hard slog in the archives.’ Business History ’The authors' thorough investigation of primary sources and secondary literature has resulted in a valuable addition to the scholarship on the machine-tool industry.’ Business History Review ’As the authors of this important study point out, the British machine tool industry was the rock on which other industries rested. Yet publications on it are sparse. ...the book will nevertheless stand alongside other key publications in economic history that tell the story of a British industry in authoritative detail. In a period in which academic publication is increasingly influenced by the idiocies of university research assessment exercises, it is encouraging that such scholarly books are still being written.’ Economic History Review