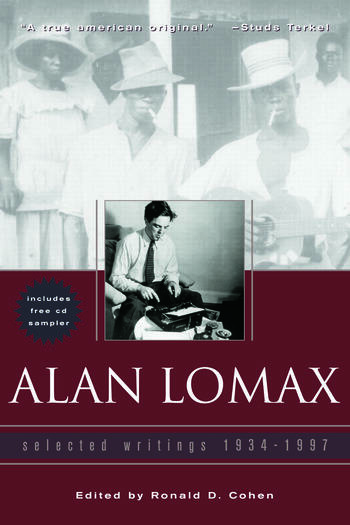 Alan Lomax is a legendary figure in American folk music circles. Although he published many books, hundreds of recordings and dozens of films, his contributions to popular and academic journals have never been collected. This collection of writings, introduced by Lomax's daughter Anna, reintroduces these essential writings. Drawing on the Lomax Archives in New York, this book brings together articles from the 30s onwards. It is divided into four sections, each capturing a distinct period in the development of Lomax's life and career: the original years as a collector and promoter; the period from 1950-58 when Lomax was recording thorughout Europe; the folk music revival years; and finally his work in academia.

Ronald Cohen (volume editor) is professor of History at Indiana University, Northwest (Gary, IN). He is the author of many books, including Rainbow Quest: The Folk Music Revival and American Society, 1940-1970 (U of Massachusetts Press, 2002). He lives in Gary, Indiana.

"Few researchers have defined a field of study so decisively as the Lomaxes did American folk music during the early 20th century. It is difficult to imagine a grander cultural legacy than the one [Lomax] left behind. Many scholars have speculated on cultural memory; Alan Lomax lived it." -- The Chronicle of Higher Education
"Selected Writings edited and well annotated by the respected folk-music historian Ronald D. Cohen, fits neatly in the literature of Alan Lomax vainglory." -- The New Republic
"Selected Writings is a full-bodied illustration of how Lomax became the pre-eminent scholar in his field." -- Austin Chronicle
"Selected Writings celebrates Lomax's contributions as a writer, scholar and radio announcer...and help[s] us understand why his musical legacy is a defining part of the American experience." -- BOOKFORUM
"This fascinating collection of highly respectful essays (and accompanying CD) proves Lomax actually learned from his subjects rather than using them to validate preexisting academic theory." -- Blender
"Alan Lomax is the most adventurous and exciting musicologist we have ever had. He almost single-handedly, after working with his father, captured the songs of African-Americans and country people, the have nots . . . with his burning social conscience and curiosity of original American music. . . He was a true American original, with his air of wonder, always open to surprises." -- Studs Terkel
"Most collectors dig up dead bones only to bury them in another, their libraries. But Alan Lomax succeeded in spreading the idea that a people could be proud of their old songs, and could continue these old traditions in spite of new times, new temptations, new terrors." -- Pete Seeger
"For over sixty years Alan Lomax devoted his life and scholarship to traditional music and the musicians who carried the legacy. From his early articles in the 1930s, on to his last writings in the 1990s, Lomax introduced American audiences to a world of creative musical excellence, virtually ignored by and invisible to the major media. With an uncanny knack for recognizing artistic excellence and an unflagging energy and determination, Alan Lomax discovered and documented some of the most important traditional folk musicians in our nation." -- Peggy A. Bulger, Director, American Folklife Center, Library of Congress
"A good sampler of the writings of America's tireless folk music collector." -- merrell NOden Mojo
"Even if you've read Lomax's awarding-winning Land Where The Blues Began, you'll find this collection fascinating. With essays ranging from Haitian music to Folk Music In The Roosevelt Era and even skiffle, it shows the breadth of Lomax's interests. A few entries are a bit academic, but most crackle with the wit, passion, and poetry of this extraordinary man." -- Merell Noden Mojo
"Truth be told, Songlines would probably not exist had there been no Alan Lomax...Lomax's innate love of and belief in people and their art was the driving force of his life; this book, which is a very good read, demonstrates that love.
It also makes you want to hear the recordings...and that's surely no bad thing"
." -- SONGLINES magazine
"This book is superbly annotated with an excellent bibliography. Right now, it's the closest we have to a biography of Alan Lomax. The inclusion of these audio tracks rounds out the picture of a complex man who has left behind a musical legacy and the tools with which to forge a deeper understanding of our American culture as well as our collective immigrant past. Bravo to Ronald D. Cohen for a superb job." -- In Print