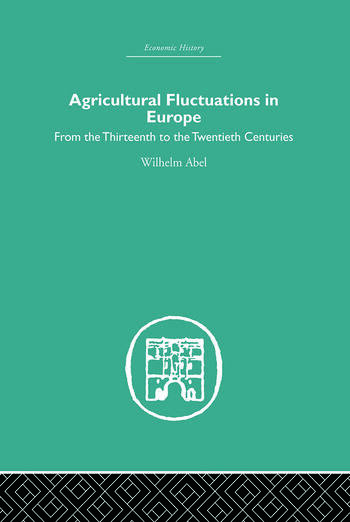 Agricultural Fluctuations in Europe: From the Thirteenth to twentieth centuries

Wilhelm Abel's study of economic fluctuations over a period of seven hundred years has long been established as a core text in European agricultural history. Professor Abel was one of the first economic historians to make extensive use of statistical data, and his scholarship and approach have had a decisive effect on the orientation of economic and agricultural history.

Using data on population, wages and rents from England, France, Germany and the Low Countries, and, on occasion, from Italy, Scandinavia and Poland, here Professor Abel demonstrates the striking similarity in the overall economic development for all these areas. He also analyses, the short-term fluctuations that have affected agricultural development within this economic framework, and is able to show the broad significance of the shape of the late medieval depression, the scale of the desertions of villages that accompanies it, and the implications of the sixteenth century price revolution.

The book's importance lies in tracing the long-term trends that have characterized European economic development since the High Middle Ages, and as such it has made an invaluable contribution to all comparative analyses of different Western European countries since it was first published in 1980.

PART ONE: CHANGES IN AGRARIAN ECONOMY OF WESTERN AND CENTRAL EUROPE FROM THE THIRTEENTH CENTURY TO THE END OF THE FIFTEENTH CENTURY

PART TWO: CHANGES IN THE AGRARIAN ECONOMY OF WESTERN AND CENTRAL EUROPE FROM THE SIXTEENTH-CENTURY TO THE MID-EIGHTEENTH CENTURY

4. Farming and the Standard of Living in the Sixteenth Century

PART THREE: THE AGRARIAN ECONOMY OF WESTERN AND CENTRAL EUROPE FROM THE MID-EIGHTEENTH TO THE MID-NINETEENTH CENTURY

7. The Upward Trend of Agriculture During the Second Half of the Eighteenth Century

8. The Agrarian Depression of the Early Nineteenth Century

PART FOUR: THE AGRARIAN ECONOMY OF WESTERN AND CENTRAL EUROPE IN THE INDUSTRIAL AGE

10. The Solution to the Problems of Inadequate Food Supply

11. Agrarian Crises During the Industrial Era

Agricultural Fluctuations in Europe: From the Thirteenth to twentieth centuries