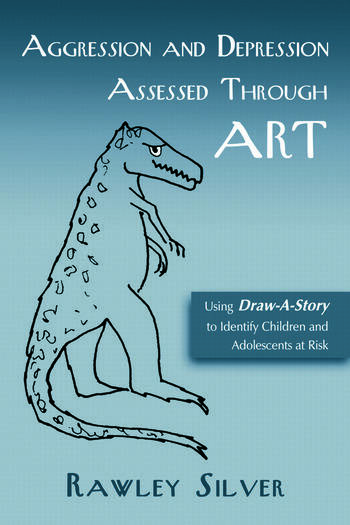 Aggression and Depression Assessed Through Art: Using Draw-A-Story to Identify Children and Adolescents at Risk

A study of more than two hundred children using Rawley Silver's draw a story test showed a strong correlation between aggression or depression and certain types of artistic narratives; meanwhile, unbeknownst to Silver, a pair of Russian therapists were using Silver's assessment tests in a similar fashion with Russian children and achieving similar results.

Aggression and Depression Assessed Through Art: Using Draw-A-Story to Identify Children and Adolescents at Risk came about as a result of these studies, but the book's scope goes beyond the numbers to investigate the connections between a child's expression through drawing and his violent behavior. The text, written mostly by Silver but with chapters contributed by therapists from both the United States and Russia, compares drawings by children who have already exhibited violent behavior with those who have not, thus exploring the potential of the test for use as an early identifier of children and adolescents at risk for depression or inappropriate aggression. Other chapters examine the changes in emotional state revealed by a child's responses to standard art assessment tests, as well as the cross-cultural applications of Silver's tests. Silver is recognized as one of the earliest developers of art therapy in the United States, and by providing mental health professionals with a tool to help identify and treat disturbed children this book represents yet another of her major contributions to the field.

Pfeiffer, Foreword. List of Figures. List of Tables. Part I: Previous Studies. Silver, Introduction. Problems of Aggression. Problems of Depression. Objectives and Procedures. Studies of Aggression, Depression, and the Role of Art. Aggression. Depression. The Role of Art. Observations by Neuroscientists. Art Therapy. Observations by Art Therapists. Art Therapists Who Used the DAS Assessment. Draw A Story, Screening for Depression. The Instrument. Why DAS was Developed and How it Evolved. Overview of DAS Studies. Reliability. Validity. Clinical Depression. Age and Gender Differences in Attitudes Toward Self and Others. Comparing Adolescents With and Without Emotional Disturbances. Observations and Questions. The Pilot Study. Procedures. Results. Observations. Questions Raised by the Findings. Part II: The Current Studies. Rating Scales Used in the Current Studies. Emotional Content. Self-image. The Use of Humor. Earwood, Fedorko, Montanari, Holzman, Response Drawings and Histories of Aggressive Students. Strongly Negative Emotional Content. Strongly Negative Self-images. Moderately Negative Self-images. Ambiguous or Ambivalent Self-images. Powerful and Assaultive Self-images. Moderately Negative to Moderately Positive Emotional Content. Summary. Silver, Comparing Aggressive and Control Groups, Subgroups, and Individuals. Differences in Emotional Content and Self-image. Depression. Reactive Aggression. Predatory Aggression. The Use of Humor. Male Responses. Female Responses. Observations. Fedorko, Montanari, Changes and Consistencies in the Emotional States of Aggressive and/or Depressed Students. Larry. Lanette. Victoria. Greg. Leroy. George. Joseph. Summary and Implications. Kopytin, Svistovskaya, Sventsitskaya, Fantasizing about Violence in Responses to the Draw a Story Task by Russian Children, Adolescents, and Adults. Children and Adolescents in Delinquent and Control Groups. Adult Psychiatric Patients in Delinquent and Control Groups. Silver, Part III: Summary and Implications. Summary and Implications. Children and Adolescents at Risk for Harming Others. Predatory Aggression. The Use of Humor. Reactive Aggression. Identifying Those at Risk. Children and Adolescents at Risk for Harming Themselves. Consistencies and Changes in Emotional States. Gender Differences and Similarities. Cultural Differences and Similarities. Differences Between Clinical and Control Group. Similarities Between Clinical and Control Groups. Research and Practice. Procedures for Identifying Students at Risk. Suggestions for Further Study. References. Index.

Aggression and Depression Assessed Through Art: Using Draw-A-Story to Identify Children and Adolescents at Risk