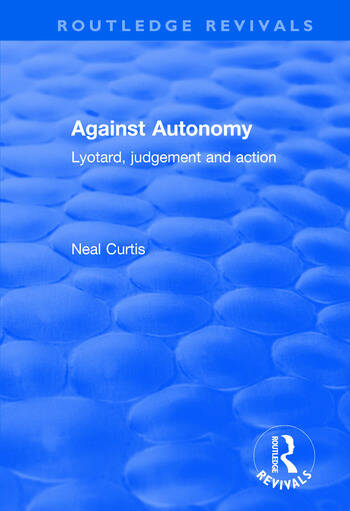 Against Autonomy: Lyotard, Judgement and Action

This title was first published in 2001: Against Autonomy reassesses Jean-Francois Lyotard's contribution to philosophy and theory, and explores how his work challenges the privileged position of the principle of autonomy in contemporary liberal democratic thinking, as seen in such diverse thinkers as Rawls, Rorty and Fukuyama. Curtis argues that the political models autonomy legitimates are inadequateÂ for thinking justice. Such models invariably promote self-legislation as the ground of freedom turning the subject away from its prior constitutionÂ by, and responsibility for, the Other. He explores Lyotard's reading of Kant as well as his responses to Levinas and Heidegger in order to rethink the political. Developing a regulative Idea based on new understandings of heteronomy and an-archyÂ Curtis shows how Lyotard's argument that there are no criteria for justice does not mean judgement and action fall prey to decisionism and relativism, but that this lack of criteria commits us to a renewed sensitivity to events. Examining Lyotard's work in relation to Arendt's writings on the vita activa, this book explores themes of community, communication and action, suggesting how Lyotard's work calls for an alternative conception of political space. This book will be of particular interest to those studying communitarianism, liberalism, anarchism, post-structuralism and postmodernism, particularly within the context of political philosophy, ethics, and political and social theory. Neal Curtis is Lecturer in Communication Studies, Anglia Polytechnic University at Cambridge, UK

’Curtis addresses important questions relating to dilemmas arising in the wake of the philosophical critiques of the foundational discourses of modernity.Â His reappraisal of Lyotard, with its implications for a post-modern politics, is an important contribution to the new corpus of work emerging on Lyotard.’ Couze Venn, The Nottingham Trent University, UK

Against Autonomy: Lyotard, Judgement and Action