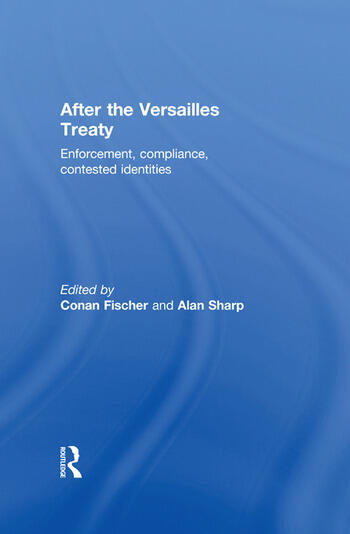 Designed to secure a lasting peace between the Allies and Germany, the Versailles Settlement soon came apart at the seams. In After The Versailles Treaty an international team of historians examines the almost insuperable challenges facing victors and vanquished alike after the ravages of WW1.

This is not another diplomatic history, instead focusing on the practicalities of treaty enforcement and compliance as western Germany came under Allied occupation and as the reparations bill was presented to the defeated and bankrupt Germans. It covers issues such as:

Introduction.  High Politics.  The Enforcement of the Treaty of Versailles, 1919–1923.  Occupation.  The British Zone of Occupation in the Rhineland.  'Hut ab', 'Promenade with Kamerade for Schokolade', and the Flying Dutchman: British Soldiers in the Rhineland, 1918–1929.  French Policy in the Rhineland, 1919–1924.  Reparations.  The Reparations Debate.  The Human Price of Reparations.  Reparations in the Long Run: Studying the Lessons of History.  Disarmament.  Disarmament and Big Business: The Case of Krupp, 1918–1925.  Making Disarmament Work: The Implementation of the International Disarmament Provisions in the League of Nations Covenant, 1919–1925.  Self-Determination/Identities.  From Lothringen to Lorraine: Expulsion and Voluntary Repatriation.  The Versailles Settlement and Identity in French Flanders.  'The Sore which Would Never Heal': The Genesis of the Polish Corridor

Alan Sharp is Professor of International Relations and Provost of the Coleraine campus of the University of Ulster. His publications include The Versailles Settlement: Peacemaking in Paris 1919 (1991) – of which a new edition is appearing shortly,; Anglo-French Relations in the Twentieth Century: Rivalry and Cooperation (2000) - a collection of essays co-edited with Professor Glyn Stone and articles on various aspects of Lord Curzon’s tenure of the Foreign Office and the career of Sir James Headlam-Morley.