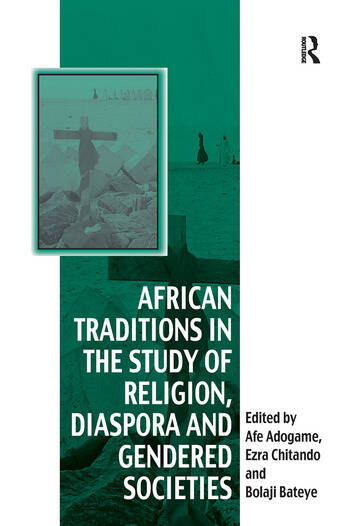 African Traditions in the Study of Religion, Diaspora and Gendered Societies

The historiography of African religions and religions in Africa presents a remarkable shift from the study of 'Africa as Object' to 'Africa as Subject', thus translating the subject from obscurity into the global community of the academic study of religion. This book presents a unique multidisciplinary exploration of African Traditions in the Study of Religion, Diaspora, and Gendered Societies. The book is structured under two main sections. The first provides insights into the interface between Religion and Society. The second features African Diaspora together with Youth and Gender which have not yet featured prominently in studies on religion in Africa. Contributors drawn from diverse African and global contexts situate current scholarly traditions of the study of African religions within the purview of academic encounter and exchanges with non-African scholars and non-African contexts. African scholars enrich the study of religions from their respective academic and methodological orientations. Jacob Kehinde Olupona stands out as a pioneer in the socio-scientific interpretation of African indigenous religion and religions in Africa and the new African Diaspora. This book honours his immense contribution to an emerging field of study and research.

Dr Afe Adogame teaches Religious Studies and World Christianity at the University of Edinburgh, UK. He is the General Secretary of the African Association for the Study of Religion (AASR). He is the author of Celestial Church of Christ: The Politics of Cultural Identity in a West African Prophetic-Charismatic Movement (1999); and co-edited European Traditions in the Study of Religion in Africa (2004); Religion in the Context of African Migration (2005); Unpacking the New: Critical Perspectives on Cultural Syncretization in Africa and Beyond (2008) and Christianity in Africa and the African Diaspora: The Appropriation of a Scattered Heritage (2008). Dr. Ezra Chitando teaches History and Phenomenology of Religion at the University of Zimbabwe. He also serves as a Consultant on HIV and AIDS for the World Council of Churches (WCC). He is the author of Singing Culture: A Study of Gospel Music in Zimbabwe (2002); Living with Hope: African Churches and HIV/AIDS. Vol. 1 (2007); Acting in Hope: African Churches and HIV/AIDS, Vol. 2 (2007) and Troubled but not Destroyed: African Theology and HIV (2009). Dr. Bolaji Bateye teaches Religious Studies and Gender Studies at Obafemi Awolowo University and she is a Resource Person at the OAU Centre for Gender and Social Policy Studies. Dr Bateye was a Leventis Scholar at the Centre for African Studies, SOAS, London in 2006. A budding scholar, widely published in books and journals including: 'Forging Identities: Women as Participants and Leaders in the Church among the Yoruba", in Studies in World Christianity (2007); 'Paradigmatic Shift: Reconstruction of Female Leadership Roles in New Generation Churches in South-western Nigeria' in Afe Adogame, et al. (eds.), Christianity in Africa and the African Diaspora: The Appropriation of a Shattered Heritage (2008).

’By focusing on the role of religion in African societies, African religious expressions in diaspora and the role of African women in the academy, the contributors to this book challenge what the editors portray as a field traditionally dominated by men, many of whom are non-African.This volume offers a methodological challenge to the wider field of Religious Studies and at the same time exemplifies the Africanisation� of the study of African religions.’ James L. Cox, University of Edinburgh, UK 'As a multidisciplinary project it succeeds beautifully, with scholarly expertise ranging from sociology to history, theology to anthropology, and gender studies to political science. Yet even with this wide scope, the editors have managed to achieve synergy throughout.' Journal of Religion in Africa

African Traditions in the Study of Religion, Diaspora and Gendered Societies