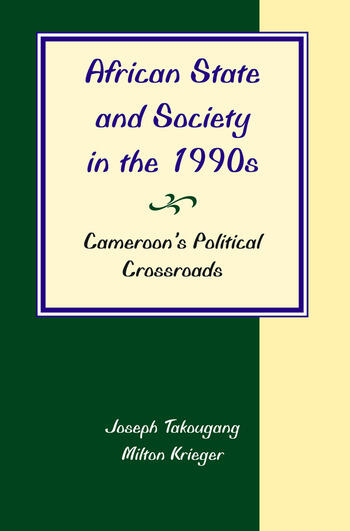 African State And Society In The 1990s: Cameroon's Political Crossroads

African State and Society in the 1990s is the first comprehensive English-language book to appear on Cameroon's political events since 1989. Designed for academic and policy studies readers, it covers developments from the 1960s to the present as background for an analysis of the continuing conflict since 1990 between the regime and political opposition over democratization. Based on extensive research in Cameroon between 1989 and 1995 in the form of interviews, independent press articles, and major political parties' writings, African State and Society in the 1990s details political confrontations?evolving from bullets to ballots?in the context of a sharply declining economy and a society wrought with ethnic, linguistic, and constitutional tensions. The authors show how the competitive stakes rise as a previously effective political class faces unsubdued challenges to its hegemony over major enterprises. The uncertainty is heightened by the fact that no coherent alliance or potentially successor group has yet emerged from the opposition forces, which now operate across Cameroon's social landscape.The book's analysis of the disarray raises hard questions about whether the nation-state can still serve as a model of stability. The national elections in 1997 make the book particularly timely as a specific case study?applicable to Africa at large?that gives insights into the chances for successful resolution of the continent's volatile political conflicts.

African State And Society In The 1990s: Cameroon's Political Crossroads