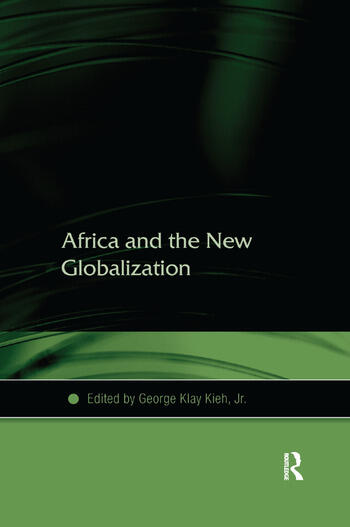 Africa and the New Globalization

Globalization is not a new phenomenon in the international system. However, the various phases of globalization have had divergent scopes, actors, dimensions and dynamics - that is, each of the phases of globalization can be differentiated according to these terms. Against this background, this book focuses on the 'new globalization', a phase that emerged when the Cold War ended and which is, significantly, the most expansive and technologically advanced of all the phases of globalization. The contributors identify and discuss many of the frontier issues in Africa that are being impacted by the dynamics of this new globalization - debt, human rights, development, state sovereignty, the environment, and the HIV/AIDS pandemic. The volume will hold particular interest for students, scholars and researchers of African and development politics.

'The objectivity and thoroughness exemplified in Africa and the New Globalization will have an enormous influence inside and outside the academe. It is neither the new discoveries nor unique contributions, but the totality of the work that inculcates such a healthy respect for fact over fancy, that make other works on the topic submerge as unimportant. The appropriate labels and relations of the new Globalization dialectically analyzed in this book will for a long time serve as a solid framework by which subsequent works on the topic can be reliably assessed.' Abdul Karim Bangura, American University, Washington, DC, USA ' ...masterfully interjects African scholars' voices into the burgeoning discourse on globalization. Given the breadth, depth of analysis, this book is a must-read for scholars, policymakers, students and others with an interest in understanding contemporary global political and economic relations, and Africa's place within it.' MojÃºbÃ olÃº OlÃºfÃºnké Okome, Ph.D., Brooklyn College, CUNY, USA 'This volume introduces African views on the impact of the new globalisation on Africa. Specifically, it focuses on some of the continent’s more pressing issues - the debt crisis, human rights, state sovereignty, the HIV/AIDS pandemic, etc. - analysing how these are conditioned and affected by the forces of the new globalisation. It is these problems, dialectically analysed, that make the book a good read for those interested in the dynamics of the new globalisation and Africa’s place within it.' Development Policy Review

Africa and the New Globalization