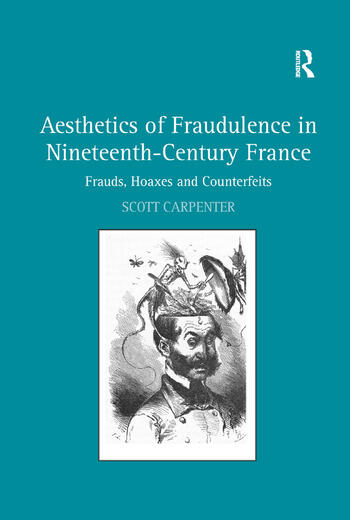 Aesthetics of Fraudulence in Nineteenth-Century France: Frauds, Hoaxes, and Counterfeits

In his engagingly written and original book, Scott Carpenter analyzes multiple manifestations of the false in nineteenth-century France. Under Carpenter's thorough and systematic analysis, fraudulence emerges as a cultural preoccupation in nineteenth-century literature and society, whether it be in the form of literary mystifications, the thematic portrayal of frauds, or the privileging of falseness as an aesthetic principle. Focusing particularly on the aesthetics of fraudulence in works by Mérimée, Balzac, Baudelaire, Vidocq, Sand, and others, Carpenter places these literary representations within the context of other cultural phenomena, such as caricature, political history, and ceremonial events. As he highlights the special relationship between literary fiction and fraudulence, Carpenter argues that falseness arises as an aesthetic preoccupation in post-revolutionary France, where it introduces a blurring of limits between hitherto discrete categories. This transgression of boundaries challenges notions of authenticity and sincerity, categories that Romantic aesthetics championed at the beginning of the nineteenth century in France. Carpenter's study makes an important contribution to the cultural significance of mystification in nineteenth-century France and furthers our understanding of French literature and cultural history.

Scott Carpenter is a Professor of French at Carleton College (Minnesota). His other works include Acts of Fiction: Resistance and Resolution from Sade to Baudelaire (1996) and Reading Lessons: An Introduction to Theory (2000).

'Scott Carpenter takes his readers for a ride: under the guise of a lively and witty excursion through nineteenth-century literary frauds and hoaxes, he provides rich and subtle readings of political caricatures and texts by Mérimée, Balzac, Sand, Vidocq, and Baudelaire (his analyses of Baudelaire's prose poems are especially penetrating). Along the way, he explores issues in the nature and aesthetics of mystification that are at the heart of the literary enterprise itself.' Carol Rifelj, Middlebury College, USA ’Scott Carpenter est un lecteur très fin: il perÃ§oit les nuances du texte, propose des rapprochements éclairants entre les différents ouvrages de Mérimée ainsi qu'entre ces ouvrages et la culture et l'histoire contemporaines. Non seulement il propose des interprétations originales et convaincantes de textes bien connus, mais s'attaque aussi Ã  un problème que nous ont rendu familier les révélations d'innombrables impostures, tricheries et fraudes scandaleuses ou canulars comiques qui viennent de jalonner la dernière décennie.’ Cahiers Mérimée ’... a wealth of scholarship on a theme that would become, of course, even more relevant in the last decade of the century, which culminated in the momentous shams of the Dreyfus Affair.’ French Studies '... Carpenter draw outs some striking resemblances between the two emperors, and he provides a brilliant technical analysis of the work’s literariness, thereby establishing its status as a fake... The other chapters of the book are also highly successful, demonstrating the analytic power of Carpenter’s thesis and method of reading. By focusing on fraudulence as his analytic prism, Carpenter has accomplished two things: he has produced new insights about well-known texts while opening the canon to a range of lesser-known frauds�. His point is not the banal one that we should expand the notion of text� or literature� to recuperate excluded� texts for the sake of recuperat

Aesthetics of Fraudulence in Nineteenth-Century France: Frauds, Hoaxes, and Counterfeits