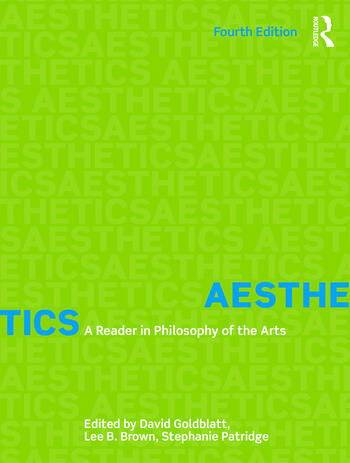 Aesthetics: A Reader in Philosophy of the Arts

Aesthetics: A Reader in Philosophy of the Arts, fourth edition, contains a selection of ninety-six readings organized by individual art forms as well as a final section of readings in philosophical aesthetics that cover multiple art forms. Sections include topics that are familiar to students such as painting, photography and movies, architecture, music, literature, and performance, as well as contemporary subjects such as mass art, popular arts, the aesthetics of the everyday, and the natural environment. Essays are drawn from both the analytic and continental traditions, and multiple others that bridge this divide between these traditions. Throughout, readings are brief, accessible for undergraduates, and conceptually focused, allowing instructors many different syllabi possibilities using only this single volume.

Key Additions to the Fourth Edition

The fourth edition is expanded to include a total of ninety-six essays with nineteen new essays (nine of them written exclusively for this volume), updated organization into new sections, revised introductions to each section, an increased emphasis on contemporary topics, such as stand-up comedy, the architecture of museums, interactivity and video games, the ethics of sexiness, trans/gendered beauty, the aesthetics of junkyards and street art, pornography, and the inclusion of more diverse philosophical voices. Nevertheless, this edition does not neglect classic writers in the traditional aesthetics: Plato, Aristotle, Hume, Kant, Hegel, Heidegger, Collingwood, Bell, and writers of similar status in aesthetics. The philosophers writing new chapters exclusively for this fourth edition are:

• Larry Shiner on art spectacle museums in the twenty-first century

• Edward Winters on the feeling of being at home in vernacular architecture, as in such urban places as bars.

Special Acknowledgements for the 4th Edition

The Limits of Likeness

The Origin of the Work of Art

Why Are There No Great Women Artists?

The Work of Art in the Age of Mechanical Reproduction

Why Photography Does Not Represent Artistically

The Hubble Photographs as Aesthetic Objects

Allegory of the Cave

Towards an Ontology of the Moving Image

Woman as Image, Man as Bearer of the Look

Beauty and Evil: The Case of Leni Riefenstahl

The Last King of Scotland—The Ethics of Race on Film

The Problem of Architecture

Home is Where the Heart Is: Taking Architecture Personally

A Discussion of Architecture (with Christopher Norris)

How to Experience Architecture

Spectacular vs. Deferential Art Museums in the 21st Century

Digital Architecture and the New Elegance

On the Concept of Music

The Expression of Emotion in Music

A Topography of Musical Improvisation

Fakin’ It: Is There Authenticity in Commercial Music?

Can White People Sing the Blues?

The Poetic Expression of Emotion

The Paradox of Expression

The Intention of the Author

What is an Author?

The Art of Writing

How to Eat a Chinese Poem

The Birth of Tragedy

What Is Going On in a Dance?

Appreciating Dance: The View from the Audience

Literature as a Performing Art

The Artwork as Performance

Why (not) Philosophy of Stand-up Comedy?

Magic: The Art of the Impossible

Plato and the Mass Media

In Defense of Popular Arts

Is It Only a Game? The Ethics of Video Game Play

Aesthetic Appreciation of the Natural Environment

The Aesthetics of Junkyards

Nonsense in Public Places: Songs of Black Vocal Rhythm and Blues or Doo-Wop

Of the Standard of Taste

Judgments about the Beautiful

The Philosophy of Fine Art

The Role of Theory in Aesthetics

David Goldblatt is Emeritus Professor of Philosophy at Denison University, the author of Art and Ventriloquism in Routledge’s Critical Voices Series, and co-editor of The Aesthetics of Architecture: Philosophical Investigations into the Art of Building, and has written numerous essays in the academic and popular press.

Lee B. Brown (1932–2014) was Professor of Philosophy at The Ohio State University and the author of many articles on a wide range of philosophical subjects, including popular music, recorded music, and jazz.

is a Professor of Philosophy at Otterbein University. Her research focuses on aesthetic properties, and moral evaluation in imaginative contexts.

Aesthetics: A Reader in Philosophy of the Arts