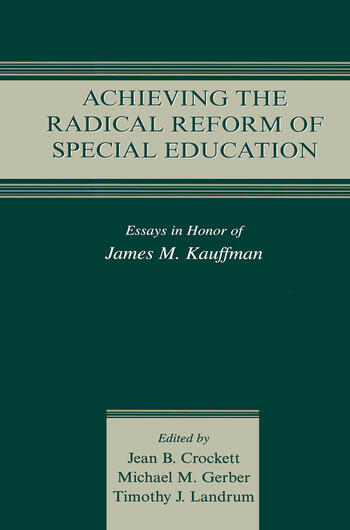 As a tribute to scholar and mentor James M. Kauffman and his prodigious influence on the education of children and youth with disabilities, Achieving the Radical Reform of Special Education highlights and examines issues central to the continued growth and maturation of the field of special education. This impressive collection features the issues Kauffman has raised pointedly and repeatedly in his writing over the past three decades. With contributions by prominent scholars, essays throughout the book provide a valuable synopsis of the status of special education and its progress toward the achievement of radical reform at the outset of the 21st century.

The volume is divided into four sections, corresponding to the following themes:
1) recognizing and responding to individual differences among special education students;
2) repairing and elaborating the historical, philosophical, and legal foundations of special education practice;
3) strengthening the field’s empirical base; and
4) confronting problems of advocacy and reform in special education.

Chapters within each section discuss the status of the field, its progress, pitfalls, and promising subsequent steps.

Achieving the Radical Reform of Special Education is intended for scholars, policy makers, and graduate students in special education and associated disciplines who seek to improve schools and to improve the education of students whose behavior and exceptional learning needs prevent their academic and social development.