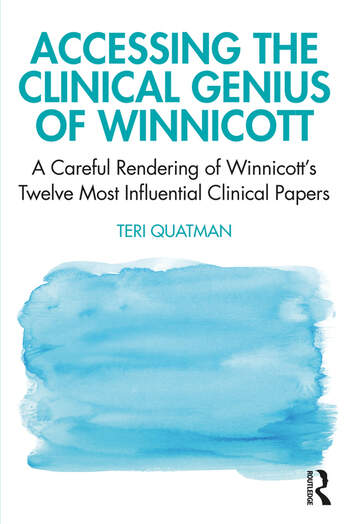 Accessing the Clinical Genius of Winnicott: A careful rendering of Winnicott's 12 most influential clinical papers

Donald Winnicott, psychoanalyst and pediatrician, is viewed by many in the psychodynamic field as the "other genius" in the history of psychodynamic theory and practice, along with Freud. This book selects and explores twelve of his most influential clinical papers.

Winnicott was a keen observer of children and parents—indeed, an inspired observer. His works have been highly valued in the decades since they were first published, and are still relevant today. They help us to understand the maturational processes of children, and how best to intervene when the enterprise of childhood leads to compromises of psychological health in later years. Winnicott’s writings on the goals and techniques of psychodynamic psychotherapy have been foundational, in that he recast Freudian-and Kleinian-influenced thinking in the direction of the more relational schools of psychotherapy that define current 21st century psychodynamic practice. Yet, despite Winnicott’s influence and continuing relevance, his writings, while at some level simple, are elusive to modern readers. For one thing, he writes in the psychoanalytic genre of the 1930s-1960s, whose underlying theoretical assumptions and vocabulary are obscure in the present day and, for another, his writing often reflects primary process thinking, which is suggestive, but not declarative. In this work, Teri Quatman provides explanations and insight, in an interlocution with Winnicott’s most significant papers, exploring both his language and concepts, and enabling the clinician to emerge with a deep and reflective understanding of his thoughts, perspectives and techniques.

Engaging and accessible, Accessing the Clinical Genius of Winnicott will be of great use to anyone encountering Winnicott for the first time, particularly in psychodynamic psychotherapeutic training, and in the teaching of relational psychotherapies.

Teri Quatman is an Associate Professor of Counseling Psychology in the Graduate Department of Counseling Psychology at Santa Clara University. She earned her Ph.D. from Stanford University in 1990, and has studied, practiced, and taught psychodynamic psychotherapy to graduate students for the past 28 years. She has also maintained a private psychotherapy practice from 1992 to the present.

Accessing the Clinical Genius of Winnicott: A careful rendering of Winnicott's 12 most influential clinical papers