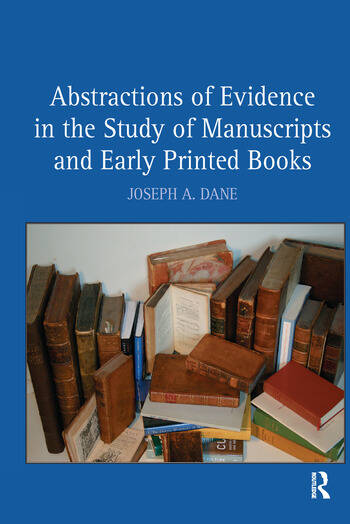 In this book, Joseph Dane critiques the use of material evidence in studies of manuscript and printed books by delving into accepted notions about the study of print culture. He questions the institutional and ideological presuppositions that govern medieval studies, descriptive bibliography, and library science. Dane begins by asking what is the relation between material evidence and the abstract statements made about the evidence; ultimately he asks how evidence is to be defined. The goal of this book is to show that evidence from texts and written objects often becomes twisted to support pre-existing arguments; and that generations of bibliographers have created narratives of authorship, printing, reading, and editing that reflect romantic notions of identity, growth, and development. The first part of the book is dedicated to medieval texts and authorship: materials include Everyman, Chaucer's Legend of Good Women, the Anglo-Norman Le Seint Resurrection, and Adam de la Helle's Le Jeu de Robin et Marion. The second half of the book is concerned with abstract notions about books and scholarly definitions about what a book actually is: chapters include studies of basic bibliographical concepts ("Ideal Copy") and the application of such a notion in early editions of Chaucer, the combination of manuscript and printing in the books of Colard Mansion, and finally, examples of the organization of books by an early nineteenth-century book-collector Leander Van Ess. This study is an important contribution to debates about the nature of bibliography and the critical institutions that have shaped its current practice.

Contents: Introduction; Part I Inference and Evidence in Medieval Books: The calculus of calculus: W.W. Greg and the mathematics of Everyman Editions; The notions of text and variant in the prologue to Chaucer's Legend of Good Women: MS Gg lines 127-38; Two studies in early medieval dramatic texts and performances; Myths of the Wakefield master. Part II What is a Book?: 'Ideal copy' vs 'ideal texts': the application of bibliographical description to facsimiles; Two studies in bibliographical identification and identity; Formal perfection and historical perfection in the 1476 Boccaccio of Colard Mansion: note on a note by Seymour de Ricci; What is [a] Caxton? From book to text; Leander van Ess and the panzerization of early books and history; Conclusion: parody, irony, and the search for books of mass destruction; Principal works cited; Index.

Joseph A. Dane is a professor of English at University of Southern California and author of The Myth of Print Culture: Essays on Evidence, Textuality, and Bibliographical Method (2003).

’... an independent paper will have the pleasant surprise of discovering that these collected independent articles somehow also form a series of concatenated bibliographical and intellectual autobiographical adventures bringing together scholarship history and the intellectual history of the scholar.’ AMARC Newsletter 'Overall, the book provides useful insights into the foundation of the modern editorial and bibliographical methodologies that have dominated book history scholarship, and which are often reemployed without proper reflection. ... it makes important reading for scholars of any age and experience...' Archiv fÃ¼r das Studium der Neueren Sprachen und Literaturen 'Dane's greatest strength is in his ability to quantify uncertainty in the realms of the bibliographical, the editorial and the textual. ... A lot of Dane's work raises some fascinating points, or spontaneously leads to detailed thought experiments and mental puzzles: which Caxton, for example, is responsible for the errors in Caxton?' Journal of the Early Book Society 'Throughout his volume, Dane skilfully highlights the changing perceptions and values of books and texts over the centuries. In doing so he not only exposes the ambiguous nature of both bibliographical and textual evidence; he also reveals the paradoxical and simultaneous objectivity and subjectivity of both books themselves and the critics who try to understand them.' Sixteenth Century Journal