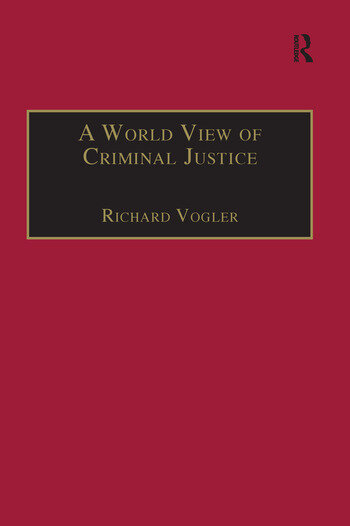 A World View of Criminal Justice

Criminal justice procedure is the bedrock of human rights. Surprisingly, however, in an era of unprecedented change in criminal justice around the world, it is often dismissed as technical and unimportant. This failure to take procedure seriously has a terrible cost, allowing reform to be driven by purely pragmatic considerations, cost-cutting or foreign influence. Current US political domination, for example, has produced a historic and global shift towards more adversarial procedure, which is widely misunderstood and inconsistently implemented. This book addresses such issues by bringing together a huge range of historical and contemporary research on criminal justice in Europe, Asia, Africa, Australasia and the Americas. It proposes a theory of procedure derived from the three great international trial modes of 'inquisitorial justice', 'adversarial justice' and 'popular justice'. This approach opens up the possibility of assessing criminal justice from a more objective standpoint, as well as providing a sourcebook for comparative study and practical reform around the world.

Richard Vogler is Senior Lecturer in the Sussex Law School at the University of Sussex, UK.

'...Richard Vogler has done a double service to the advancement of the study of comparative criminal procedure. First he has engaged in enormous comparative scholarship in assembling in one book sketches of the histories of criminal procedure not only in his native England, Continental Europe and the US...but also in the Islamic world, China and the vast areas of the so-called Third World which were subjugated by the colonial powers. Secondly, he has offered a fresh three-pronged theoretical analysis of the dominant legal systems in the world today...' Professor Stephen Thaman, Saint Louis University School of Law, Saint Louis, USA 'The book impresses by the command the author displays of a mass of pertinent information, and his ability to draw together the main strands to form a coherent picture...This book should go far.' International Criminal Law Review '...an amazing treatise on the history and background of modern criminal procedure...[Vogler] presents a very well researched and appealing analysis of the criminal process and its reform tendencies from the middle ages until today...He has provided a brilliant sourcebook on comparative criminal procedure and a fresh, differentiated, yet consistent theoretical approach to comparing criminal justice systems.' Criminal Law Forum 'This book...serves a good contribution to the framework of comparative criminal justice systems and the presentation of different ideologies.' Contemporary Journal of International Criminal Law 'This is an excellent book and one that should be on the shelves of all interested in the development of criminal processes throughout the world.' British Society of Criminology

A World View of Criminal Justice