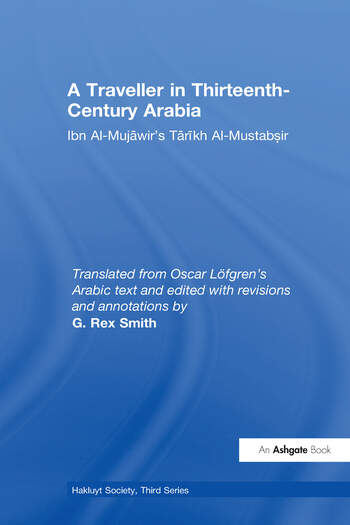 This is the first English translation of the Tarikh al-Mustabsir, written in the early quarter of the thirteenth century by Ibn al-Mujawir. The text is a fascinating account of the western and southern areas of the Arabian Peninsula by a man from the east of the Islamic world, probably from Khurasan in Iran. Ibn al-Mujawir was a man who in all probability followed the age-old Islamic practice of making the pilgrimage to Mecca and thereafter travelling in the area to further his business interests. His route began in Mecca and essentially ran south through the Red Sea coastal plain, Tihamah, down into the Yemen and along the southern coast of the peninsula. He paused long in Aden, where he observed closely the activities of the port to report at some length on its administration, its taxes, its markets, its currency, its weights and measures, and the like. His route then continued along the southern coast of Arabia into the Gulf, and he presumably returned home to the east via Iraq. The author is a wonderful observer of people: their buildings, their dress, their customs, their agriculture, their food and their history. This book is a unique source for the social and economic history of thirteenth-century south Arabia, written with a humour and wit otherwise unknown in the writings of medieval Islam. The text is of major linguistic importance too, written as it is in a far from classical Arabic. This translation is fully annotated with an introduction, appendices, glossary and full index, and contains maps and illustrations.

G. Rex Smith is an Emeritus Professor of the University of Manchester, UK. He was professor of Arabic there, 1990-97, after teaching also in the universities of Cambridge, 1970-75, and Durham, 1978-89. A large part of his research over the years has been in the field of Arabian history, particularly that of the south of the peninsula, the Yemen. He has published numerous articles on this subject, some of which are collected in Studies in the Medieval History of the Yemen and South Arabia (Variorum, Ashgate, Aldershot, 1997). He has also published (in two volumes) The Ayyubids and Early Rasulids in the Yemen, Gibb Memorial Series, London, 1974-78, the first volume of which is the edition of an Arabic chronicle which covers the period of the Ayyubids in the Yemen and the Rasulids down to the year 694/1295. He is the translator and annotator of a volume of The History of al-Tabari. The Conquest of Iran, vol. XIV of the Bibliotheca Persica, Albany NY, 1994. Recently he published A Medieval Administrative and Fiscal Treatise from the Yemen, Journal of Semitic Studies Supplement 20, Oxford, 2006. He has written numerous entries for the Encyclopaedia of Islam (second edition) and has been an editor of the Cambridge History of Arabic Literature, Journal of Semitic Studies and New Arabian Studies.

’...a major event in the world of Arabian studies. ...it is a work of considerable scholarship. Prominent among its many strengths are the attention given to elucidating Ibn al-Mujawir's often garbled accounts of contemporary and earlier political and dynastic history, and to commenting on his dense information concerning trade, commercial practice, taxes, weights and measures. Most important, through his twenty years of textual travels in and around Tarikh al-Mustabsir, Professor Smith has opened up the broad landscape of Ibn al-Mujawir's Arabia, in all its richness, strangeness and - not least - comedy, to a wide a new readership.’ Bibliotheca Orientalis '... we can only be full of admiration about what has been achieved here.' Journal of the American Oriental Society